We recently celebrated Scott’s 40th Birthday: A simple affair, really. His only request was that I make all his dreams come true. Or at least the dreams that can be bought or rented for a Saturday night in early November:

The party was quite a success, proven by the fact that nobody – including us – bothered to take pictures. Wait, here’s one:

As we quickly learned, it takes a village to throw a party. We had friends hauling kegs up two flights of stairs; older children babysitting younger children; neighbors setting up projectors on top of scary-tall ladders; Aunts and Uncles picking up Chinese food; Grandmas organizing appetizer trays.

Chaos was inevitable, as it should be. Post-party, it took us two weeks to fully excavate and classify the party artifacts.** That’s when I discovered a mysterious brown paper bag stuffed with dozens of ketchup*** and sweet-and-sour packets that the Chinese restaurant had shoved under the appetizer trays. 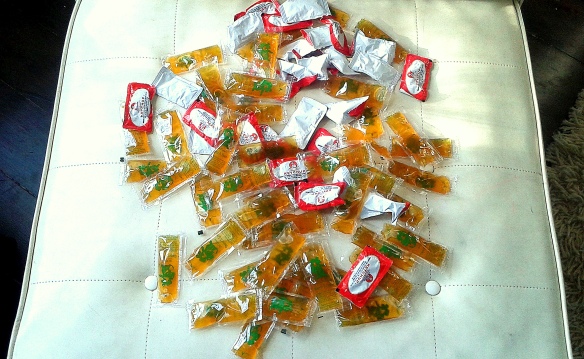 I detest any behavior that could be classified as “wasting food,”**** so instead of tossing them in the garbage, I hoarded the packets for several weeks. I even concocted a plan to sneak back into the Chinese Restaurant and secretly return the orphaned condiments to their original crates.

I thought, “There must be a way to use these things without actually eating them!”  The breakthrough came this past weekend, when our family put up our little Technical Christmas Tree.*****

As Scott and Max unpacked our “traditional” ornaments, I stared at the bare tree. Then back at the condiment packets. And then this little box of hooks I had just bought for a friend’s tree-decorating party: 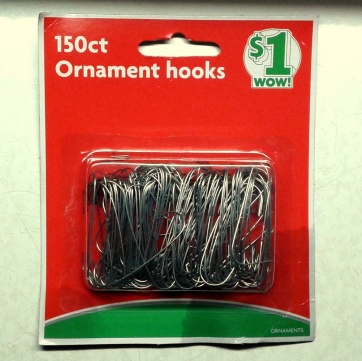 The translucent sweet and sour packets – glowing green and gold under the low winter sun – would look so beautiful contrasted against the blue-white shimmer of our technical tree.

I pulled a push-pin out of the bottom of my shoe and carefully punched a tiny hole in the top of a sweet-n-sour packet: 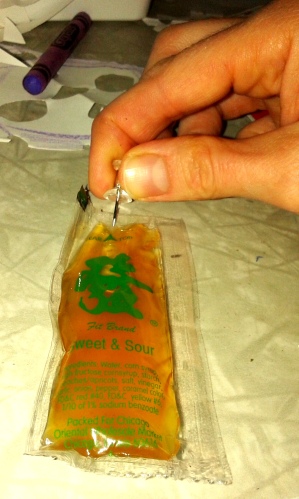 Next, I threaded a hook through the hole and twisted the end shut:

I handed the hooked packet off to a small child to hang on the tree. 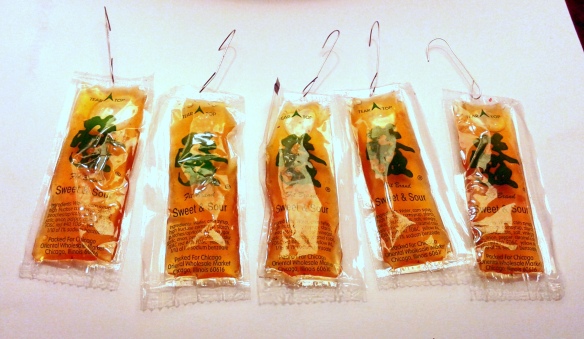 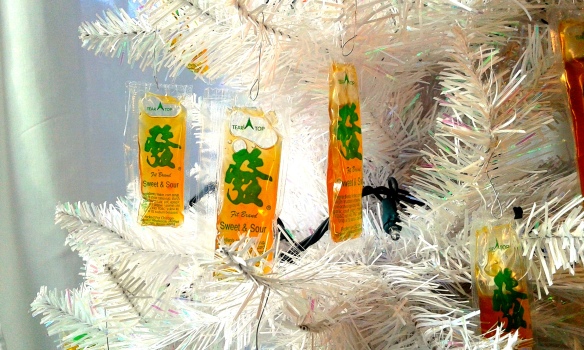 As I poked more packets, I heard the crash of several delicate glass ornaments, smashed to pieces by a small child. In that moment, I knew that these soft, harmless condiments were not only glamorous, but safe for the whole family.

I had to work quickly, before the Family Christmas Tree Traditionalists figured out what I was up to. As of this writing, they’re still in the basement looking for extension cords: 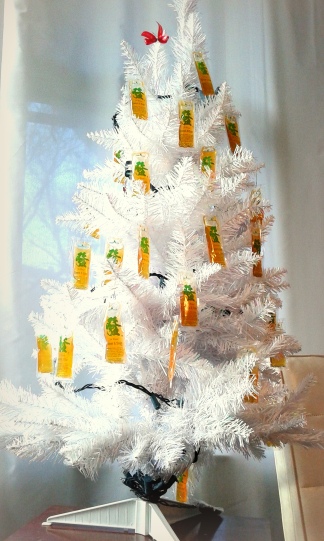 ———————————————————————
* Anyone know the plural of whiskey sour? Whiskey Sours or Whiskeys Sour? Or, as your cousin on Facebook might say, Whiskey Sour’s.
** Partifacts! See, I’ve limited myself to only one portmanteau today. Portmanteauday! Damn, I did it again. Portman-Two-Day!  Ahhh… make it stop.
*** You read that right, non-Americans. Ketchup on an egg roll.
**** My children have inherited my disdain for wasting food, as evidenced by their proclivity for eating food off the sidewalk. Which also explains their award-winning immune systems.
***** I reject the label of “artificial” or “fake” to describe a Not-Previously-Alive Christmas Tree. I prefer the term used for Contemporary Activewear, which is called “Technical Fabric” and most definitely an improvement on the Rocky Balboa-style cotton sweatpants of the past. And in this metaphor, Rocky’s sweatpants are analogous to your “real” Christmas tree.

14 thoughts on “A Sweet-and-Sour Christmas Tree”