Have I told you lately how much I –[BIG SIGH]– sacrifice for my children? The sleepless nights, the butt-wiping, the cooking,* the cleaning; the belly button that used to be vertical but is now stretched horizontal, thus ending my lucrative career as a hernia belt model:

And nowhere is this selfless martyrdom more evident than in the slow renovation of the Babushka House.  We’ve improved every room in the whole house, at least slightly. Except for one:

Yes, I intentionally messed up the bed before I took the “before” picture. But we really do have that many pillows.

The adults’ bedroom has not seen lick of progress since we moved in more than a year ago: Not one drop of paint has been smeared upon its dingy walls, its dreariness preserved in time, like it was forever 1974, when Babushka was at the height of her pale-pink, gold-flecked wallpapering powers.

As soon as we moved in, we started working on the teen bedroom, probably because of the ½-inch crack in the wall, or maybe because the ceiling resembled a Saltine cracker left in the bottom of my purse for six months.   Next, we painted the little ones’ room while they visited their Aunt and Uncle —when Scott and I should have been enjoying a romantic weekend of thrift store shopping and eating ice cream for dinner [SIGH].

Our bedroom was simply the easiest room to ignore, since it was the last place that visitors were likely to wander, the most “private” space in the house. Simply shut the door during parties, and nobody would see how decades of dust have drawn a permanent outline of Babushka’s bedroom furniture and religious icons: 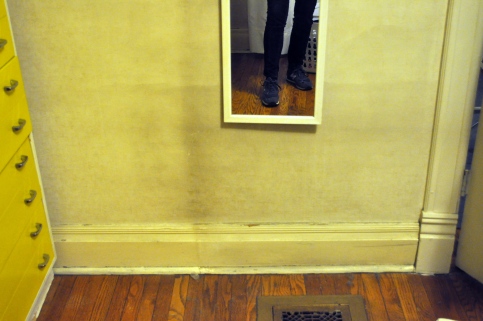 In case you’ve ever wondered where Babushka put her dresser.

This is the last thing Scott and I glimpsed as we drifted to sleep at night, and the first thing we saw when we woke up in the morning:

Despite its dinginess, the wallpaper is in pretty good shape; any tears or droops that you see are the result of me peeling it back to see what’s underneath…. Layers and layers of Victorian-era wallpaper, warped plaster, and the prospect of multiple weekends spent sanding, patching, scraping and painting.  Let’s just put that right back, shall we? 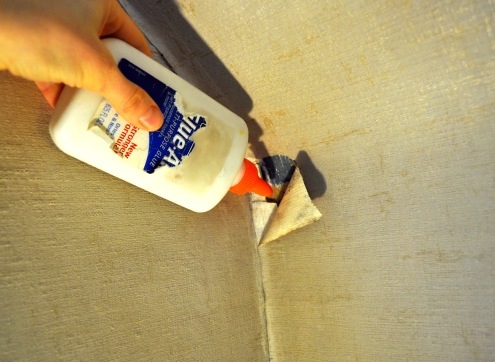 As soon as the temperatures hit 50°F (30°C), I announced to Scott that Spring Painting Season had officially begun, and that painting the wallpaper was a perfectly acceptable way to exorcise the Ghost of Babushka from our bedroom.

Since I’m hopelessly indecisive about colors, I scratched the itch by slathering the whole room in a coat of white primer:

As I whitewashed a lifetime of dust and decay, my emotional response was visceral and sudden: Waves of blinding white joy and relief. And that’s when I decided: The Adult Bedroom Shall Be White.

I’ve always resisted white in my home decorating, equating it with the walls of hospital waiting rooms or cheap rental apartments. Then I remembered that white is not only the color of Institutional Complacency. White is fresh, clean, modern and minimal. It’s the color** of snow, of eggshells, of endless ropes of soft-serve vanilla ice cream at the Chinese Buffet up the street.

Forget the ice cream – my white would be pure, bright, shining white. The white of celebrity teeth, or a fresh pack of undershirts. The kind of white that could wash away the past of dead strangers and make this room feel like it belonged to ME!***

Sam and I headed to paint store, where we stared down dozens of flavors of white, all with equally unhelpful names: White Flour, Ice Cube, Choice Cream, Big Chill, Nuance.**** 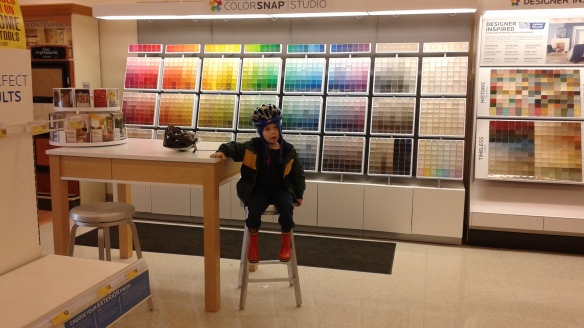 Sam learned that the hardest part of being an American is constantly having too many choices.

Finally I instructed the man at the counter to just give me the can of paint that you start with before you add other colors. They named it, without irony, “Extra White.”

After one layer of white paint on the walls and ceiling, I was ready to call it quits. I ran into my buddy Kevin at the school playground, who wisely advised,  “You’ll never regret a second coat of paint, but you might regret stopping at one.” He was right. On the way home from school, we bought another can of Extra White, and the next morning I went back to work.

That night, Scott and I pushed the furniture back to the wall and enjoyed low volatile organic compound-fueled dreams. The next morning, the view from the bed was much brighter: 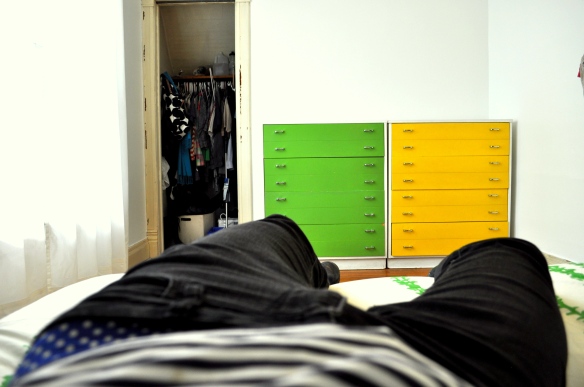 For dramatic effect. I don’t normally sleep in my clothes, at least on weekdays.

It wouldn’t be the internet without a little “Before and After:”

——— footnotes ———
* Note to friends who have recently been over for dinner: The butt-wiping and cooking are usually separated by a thorough hand washing by at least one of the parties involved.
** Okay, smartypants. I know that white is not actually a COLOR, but a mixture of the frequencies of all the colors of the visible spectrum, containing all wavelengths of visible light. When you get your own blog, you can find a catchy way to say that.
*** Technically, the room belongs to Chase Bank™ until the third quarter of 2045.
**** If I ever change careers and become a rapper, I will look to the paint chip section at Sherwin-Williams for my stage name.

5 thoughts on “The Adult Bedroom Goes Beyond the Pale”