I live in what you might call a “gentrifying” neighborhood. When I moved here 14 years ago, my hood had exactly half a coffee shop. And now we’ve got  least five, one of which installed metal plates over their outlets to keep creative/work-at-tome types like me from loitering all day on our outdated laptops. *

Here’s yet another sign of gentrification: After the original owners died, the two-flat** next door is being gutted and flipped by developers.  Don’t worry Scooby-Doo, the house is not haunted.

Last week, while harvesting icicles in the alley (for the children to duel with, of course), I noticed an elegant piece of wood sticking out of the snow between two trash cans next door.  Since the contractors were gone for the day, I snuck back and dug out a beautiful mid-century wooden captain’s chair. 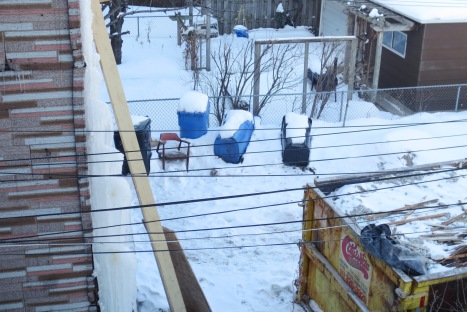 View from my back window. Can you spot the orphaned chair?

I JUST HAD to rescue this chair from its snowy grave! But – even though it was clearly bound for the landfill – technically this chair was on private property, so I let it be. If only there was a version of Children and Family Services for neglected mid-century furniture!

That afternoon, I casually mentioned my ethical dilemma to Scott.  When he arrived home from work, he brought me a little present:

Oh yeah… THAT’s why I married this guy.

This poor orphan was gorgeous and seriously solid, with neither a wiggle nor a creak in its joints. It was born just across the Hoosier curtain in Jasper, Indiana:

Maybe I’ve been watching too much “Sherlock,” but I’ve seen enough old chairs to know that this sticker included the words “Property of” and “Illinois.”  So my stolen chair was itself stolen from Illinois taxpayers. Sorry to confirm any stereotypes you may have had about Chicago.

Despite its solid bones, Orphan Chair was water-damaged and pockmarked from decades of abuse. Let’s take a closer look…

WARNING: The following images may be difficult for our more sensitive readers…

Once I let the snow melt and the wood dry, it was time to get to work.  My goal was to give this chair a complete makeover without spending a dime. Here’s how I did it:

HOW TO GENTRIFY A ABANDONED MID-CENTURY MODERN ARMCHAIR

STEP ONE – SEAT BACK CUSHION:  This chair’s vinyl cushion was mostly intact, but so permanently filthy that it can only be described as “Dirty Cow Tongue.”**

Best just to re-cover it. Luckily, I had just enough white-and-grey chevron oilcloth from my IKEA bench recovering project to get the job done. First, unscrew the cushion from the back of the chair. 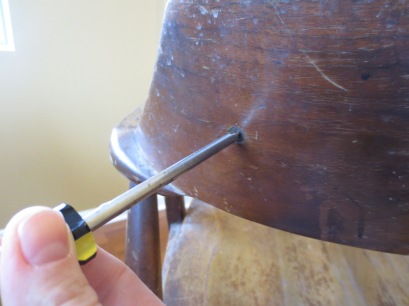 Due to decades of accumulated backsweat (and maybe some glue), I had to then pry the cushion off with a flathead screwdriver.

Take a moment to compare the exposed vinyl to the “virgin” vinyl in back, which could best be described as “nuclear bubble gum:” 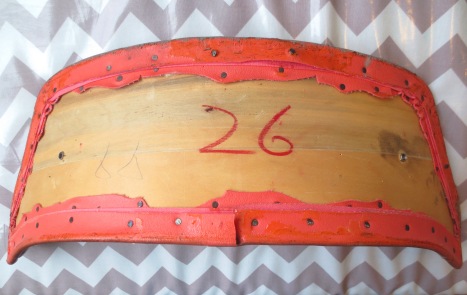 Now don’t freak out, but we’ll have to re-cover both the cushion and the PIPING. Remove the piping, which is nailed on to the back of the cushion. Go ahead and toss those little rusty nails on the floor, where you’ll never see them again. 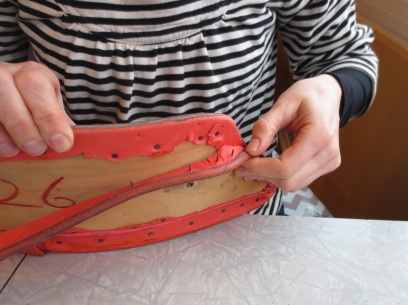 Next, pull the cord out of the pink vinyl enclosure.  To make new piping, cut a piece of  fabric that is the length of the cord and 2 inches wide.

Wrap the new fabric around the cord like a taco, pin it in place and then sew it together. Put aside for a moment.

Next, cut a piece of the same fabric in the shape of the cushion, plus about an 2 inches extra.

Starting in the center and moving out towards the ends, staple the fabric VERY TIGHTLY to the back of the cushion. Since this cushion has a curve in the middle, it was tricky to staple it on without unsightly bunching.  Just keeping pulling tighter and stapling harder, making sure to throw in some swear words for your effort.

Center your piping over the top of the cushion. 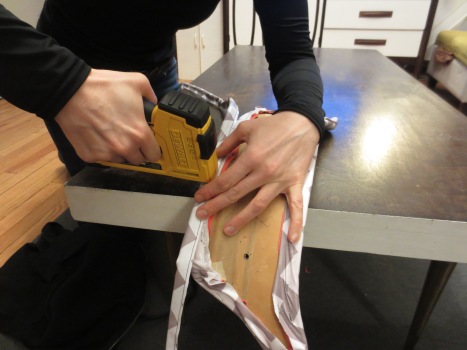 Since position is so important in this step, I found it helpful to tape the piping in place as I stapled it down.

When your piping gets to the bottom center of the cushion, simply insert one end of the cord into the “taco shell” of the the other end and staple shut, so that no cord is exposed.  This concept is pretty much impossible to explain in photos: 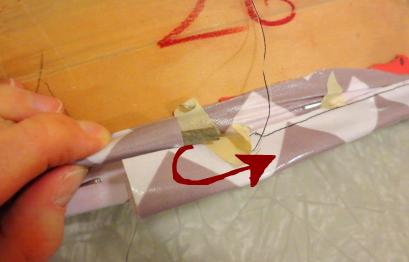 See, that wasn’t so bad!

STEP TWO – REFINISH THE WOOD:  We’ll have to sand down this whole chair for two reasons: 1) to even out the scars in the wood and, 2) to remove the original shiny finish so that our new stain will “take.” This requires the use of a power sander.

PRO-TIP!!  This winter has been particularly brutal for crafty types without basements or garages. But don’t let that stop you from sanding, drilling and  painting all season long!  Simply find a room near the back of your house, preferably with plenty of windows (in my case the dining room). Use two pants hangers to drape an old sheet over the door to keep the fumes/dust/poisonous gases from reaching the lungs of delicate family members. SAFETY FIRST! 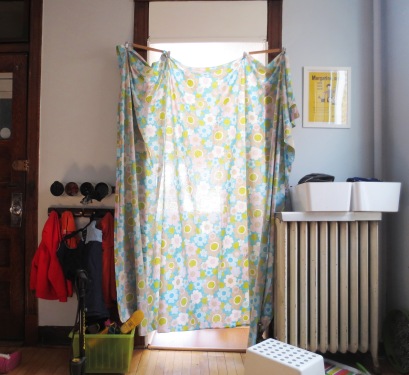 Now, go ahead and sand the @#$%* out of that chair. Seriously, go to town on that thing, starting with 80-grit paper and finishing it with 150. Remember, the higher the grit number, the finer the sanding.

Sanding the @#$ out of your chair: Before and After

Wipe off the dust with a damp rag and let dry. Next, grab a can of wood stain and finish. I happened to have this can of Dark Walnut, which I also used to refinish a coffee table, my standing desk, and our Credenza/TV stand. If I wasn’t such a cheap-ass, I would have picked a lighter stain, but hey, it was already there, and I really wanted to spend zero dollars on this project. 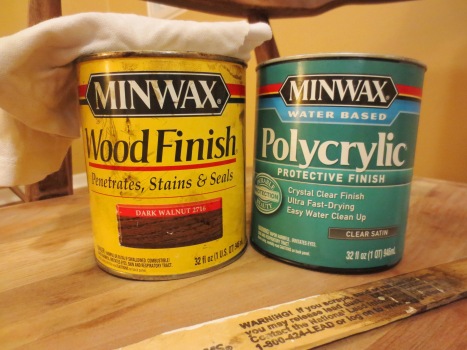 Following the directions on the can, use an old rag (I used baby sweatpants!) to apply a sloppy coat of stain to the raw wood. Make sure to wipe the excess stain within 5-10 minutes, or else it will dry into a sticky, tar-like mess. You can always apply a second coat if it doesn’t seem dark or even enough at first. 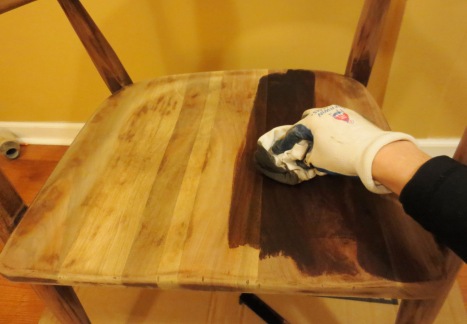 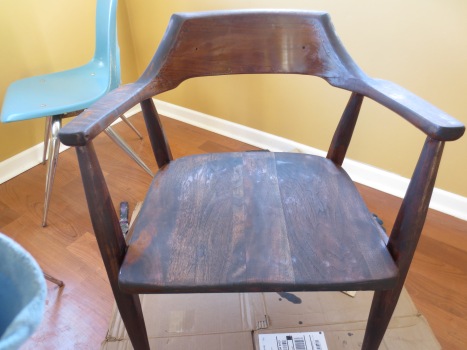 Wait 24 hours, get some fresh air, and apply the Polyurethane varnish in three VERY THIN coats, with about two hours dry time between each coat. The varnish will go on in a disturbing milky blueish white, but will dry clear and shiny!

When all your chemicals have dried, screw the cushion into the back of the chair, and take the whole thing into your bathroom to take pictures! 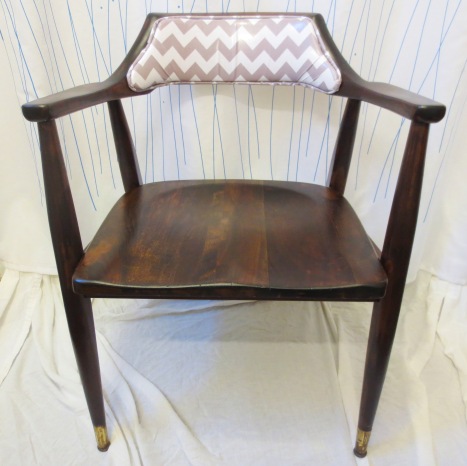 Pretty soon, I’ll have enough old chairs to open a coffee shop of my OWN!

* Don’t worry, there are still at least two coffee shops left in the neighborhood with musty furniture and disturbing artwork.
**Two-flat is a Chicago term for a building with two apartments.  Except that nobody calls their apartment a “flat;” that just sounds snooty.
*** As a certified City Girl, this is only an approximation of what I believe a dirty cow tongue to look like.

21 thoughts on “Gentrify Your Neighborhood, One Abandoned Chair at a Time”