It’s Election Day here in Chicago. Well, it’s actually just the Primary, but Chicago has what political scientists might call a “one-party system.” Republicans? Ha, we never heard of ’em.

Me and most of my friends live in 39th House District of the Illinois General Assembly. Today we choose  between the (Democratic) incumbent, Toni Berrios, and her (Democratic) challenger, Will Guzzardi.

Toni Berrios is a child of one of the most powerful political families in Illinois. Her father is not only the Cook County Assessor, but the boss of the entire Cook County Democratic Party, affectionately called “the Machine.” If you’ve ever feared the day when machines become sentient and begin to reproduce, this is it.

Will Guzzardi, on the other hand, is a young, progressive community leader who lost his last challenge to Berrios by 125 votes.* Ouch. Since then, he’s built a happy army of grassroots supporters, who have knocked on over 60,000 doors in the district.

In response, the folks in the Berrios/Machine camp have covered the district in a diarrhea of negative campaign ads. Most of the flyers accuse Will Guzzardi of supporting sex offenders, based on out-of-context quote from his college newspaper.

Thank goodness for people like my friend Julie. Barely a day goes by when she’s not working to help elect progressive politicians, keep schools open and funded, and make our neighborhood a better place to live. Or, posing for pictures with her family in my bathroom:

During a recent Sunday morning run, Julie joked that she had so many slimy campaign flyers from Toni Berrios, she could make a dress out of them and wear it to the Guzzardi victory party.  Since my guiding philosophy here at Projectophile is “make beautiful things out of dirty trash,” I felt obligated to bring this brilliant idea to life.  Also, I really wanted to go to the election night party. What better reason than to make a “PROPAGAN-DRESS” for my beautiful friend Julie.

HOW TO MAKE A “PROPAGAN-DRESS” OUT OF DIRTY CAMPAIGN FLYERS

STEP ONE – GATHER and SORT PROPAGANDA:  Since I’ve been tossing most of my political mail in the recycling, I sent a message to all my neighborhood friends to bring theirs to our bi-weekly “Playgroup Happy Hour.”** Before the night was over, I had a fat sack of propaganda – at least 100 flyers.

Now, it was time to curate the slime. First, we put aside all the fairly “vanilla” flyers: the ones that pictured Toni Berrios blankly staring at a table of senior citizens or couple of vigilant police officers.  Next, we cleared some space on the floor and instructed the children to play a fun game of “matching:”

PRO-TIP!!  Don’t just use your children as free labor. Now is a great time to discuss some serious topics, like the consequences of perpetuating the “stranger danger” myth, the effects of money on politics, and the representations of class and race in stereotypes about criminal sex offenders. But… you know… keep it fun.

Next, see how many of each flyer you have, and if they are intact enough to be sewn into a dress.

STEP TWO – CONSTRUCT THE “SKIRT”: Luckily, Julie and I are about the same size, so I was able to use myself as the model.

To make the skirt, I wanted to hang rows of identical flyers off of a waistband. I needed the skirt to remain somewhat open and flowing, and not restrict Julie’s movement (there might be dancing!). First, I cut the waistband out of on old pair of silk long johns.

Since most of the campaign flyers were 10 inches wide, I figured that with some overlap, I could fit 4 rows of flyers around her waist.  While wearing the waistband, I had Scott (carefully!) slip 4 pins into it, one about every 8.5 inches. Then I sewed a large black button onto the waistband into each of the four spots we marked with pins: 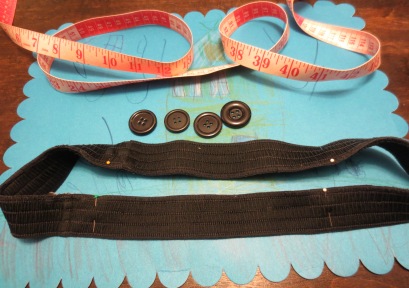 Yes, I can also see the crazy monster face in this picture.

To make the body of the “skirt,” I gathered up four of each flyer and punched holes in the corners with a hole punch. 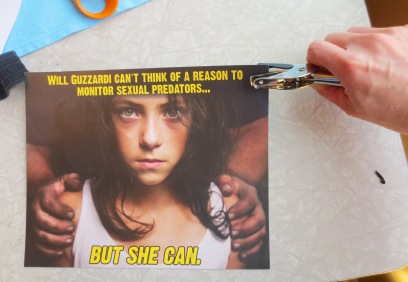 Next, I grabbed about three feet of elastic cord to thread through the corner holes. You could also use yarn, but I wanted to keep as much movement as possible in the skirt (plus, I had a bunch of it leftover from Halloween). Start by pulling the cord from the front to the back of the top corner hole:

When you get to the bottom of the last flyer, tie the cord in a knot in back, and cut off any extra cord.  You can see here I slipped some masking tape over the cord end to help it slip through the holes easier.

Each “row” of flyers should now look like this. Repeat four times:

If you stare at the picture long enough, the sex predator starts to move.

Finally, make a “handle” by tying the cord ends at the top together in a tight knot. When we finally get dressed for the party in Step Four, you’ll slip each handle over two of the buttons on the waistband.

STEP THREE – CONSTRUCT THE DRESS TOP:  For the top, we will first make  our “front” and “back” panels. Connect two pairs of flyers together using your cord or yarn:

Next, steal the ribbon from the handle of an old Christmas gift bag: 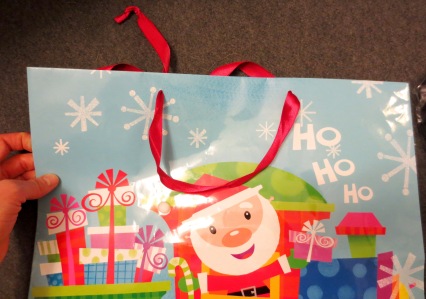 Punch holes in the top corners of each flyer set, and thread the ribbon through to connect the flyers, knotting it securely in back of each: 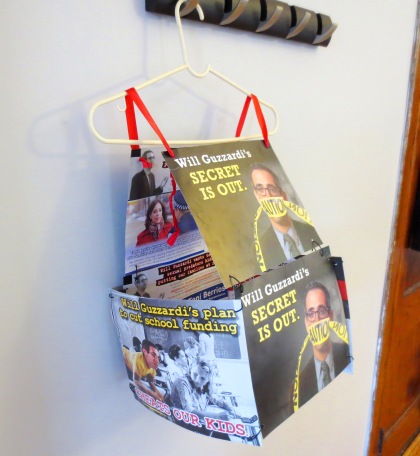 STEP FOUR – GET DRESSED FOR THE PARTY! I’ll confess, one of the biggest reasons I volunteered for the Will Guzzardi campaign is so I’ll have a reason to go to the election night party, perhaps to make up for being pregnant when Obama was elected in 2008.

To wear this dress, first pull on your fanciest black leggings and a tight or thin black shirt.  Either by yourself or, preferably, with the help of a friend, pull the Dress Top over your head. You can still make adjustments to the “shoulder ribbon” if necessary.

Next, pull on the waist with the buttons on it. Take your first row of flyers and hang its handle over two adjacent buttons.

Repeat with the other three rows of skirt flyers. Remember that each button will hold the handle of two flyer rows, so there will be a bit of overlap at the waist, but the skirt will remain open at the bottom for dancing or using the ladies’ room.

How did our Propagan-Dress do during the Victory Party?

Getting Julie dressed at home: 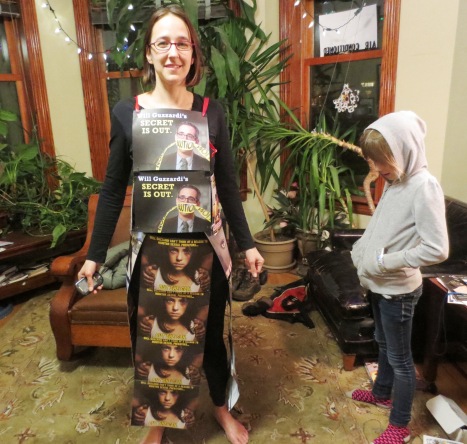 Arriving at the Party. Free beer! What does that woman in blue think of the dress?

A couple hours later, post-Victory Speech, the dress is still intact! Our inhibition, not so much.

Ladies and Gentlemen, the newest member of the Illinois General Assembly!

* To put it that number in perspective, there are at least 125 people living on my block.
** Playgroup Happy Hour = Every other Friday night, a bunch of families bring food and beer to someone’s house.  The parents drink and gab, the kids run around and play, everyone is happy.