Welcome to Projectophile’s annual installment of the Super Bowl of Snacks! Loyal readers may recall the concept from last year –a party for your friends who love snacks and beer, but not football. For the second year in a row, we’ve turned the art of snacking into a friendly competition, with awards for Best Snack in Five Categories. And since this is a DIY blog, I’ll show you how to make prizes out of regular household items. Or, skip the tutorial for a rundown of this year’s winners. 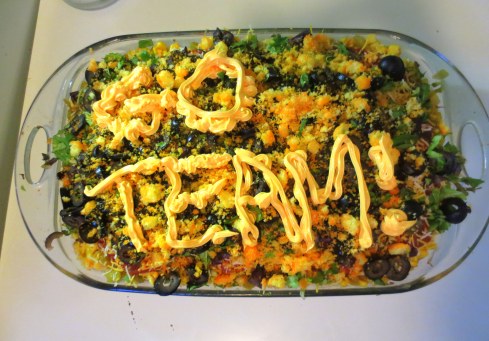 My 20-Layer Dip — the Burj Khalifa of snacks.

MOST ORANGE: I really struggled with how to materialize the concept of orange. What’s the most orange thing you can think of? An orange? Too healthy. John Boehner? An Oompla Loompa? Both too creepy for a light-hearted snack party.

Then, the idea hit me as I was rolling down the pasta aisle at Aldi. The packet of “cheese” powder that comes in a box of Mac-n-Cheese. As far as I can tell, it’s just orange food coloring, salt and sawdust. Mixed with a stick of melted butter and some noodles, it’s a meal, according to the USDA. 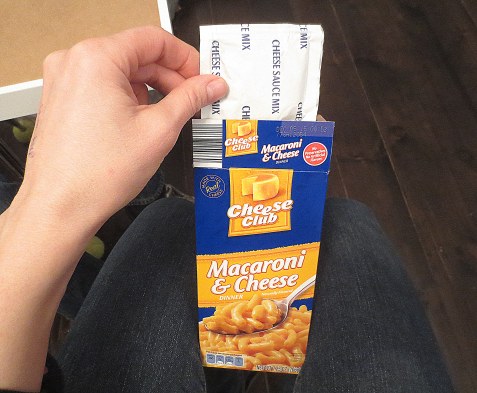 To make the award, remove the packet of cheese powder from the box and stick a paper clip through the top, careful not to puncture the pouch itself. If you expect things to get a little rowdy, reinforce the hole with clear packing tape. 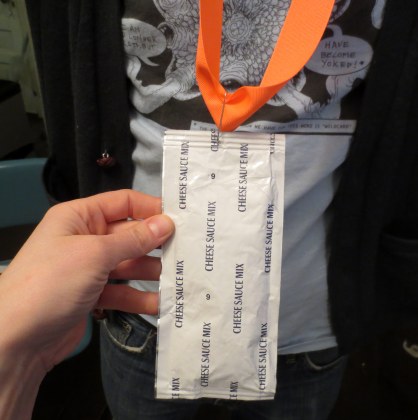 MOST UNHEALTHY:  It was a toss-up between an empty pill bottle and a comically giant syringe. Sam and I headed to Walgreens drug store for inspiration, where I stumbled upon the seasonal “Valentine’s Crap” aisle. True to the spirit of the award, I bought a plastic red heart filled with mini-Snickers bars, which Sam and I ate for after lunch.

After you’ve emptied the plastic heart, drill a tiny hole at the top and string a paper clip through it. 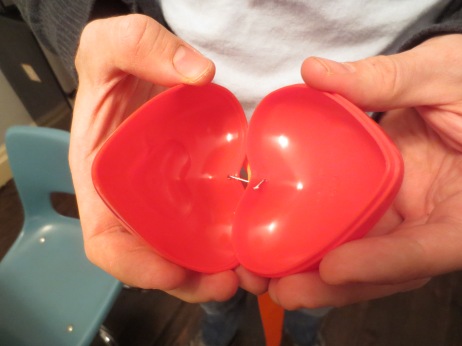 Put it back together and stick a couple of bandages across the front in a haphazard, dramatic fashion. 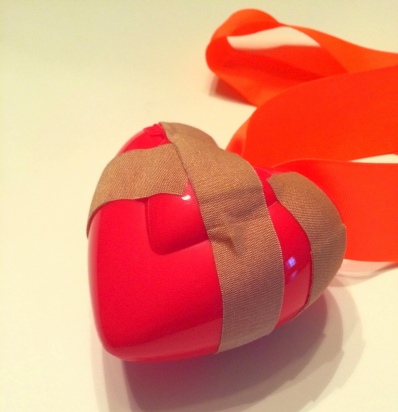 MOST OFFENSIVE:  No, I’m not sure what this is supposed to mean, either. But I was looking for a fresh new category, and my friends John and Julie proposed it to me at a party a week before. “It could mean anything you want it to mean!” they exclaimed.

First, make a simple silver medal by cutting a circle out of cardboard, in this case an empty box of Old Style.

Wrap the cardboard circle in aluminum foil, and seal it with clear packing tape. And (you guessed it), poke a hole in the top and pull a paper clip through it. 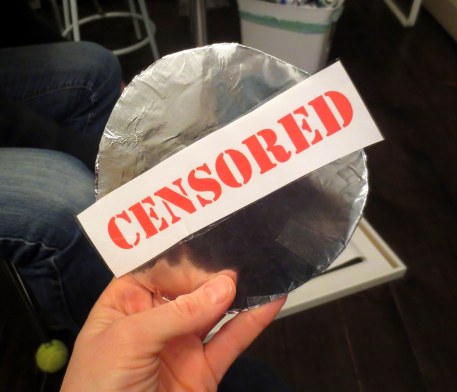 Poke a paper clip through the top and reinforce the whole thing with more packing tape: 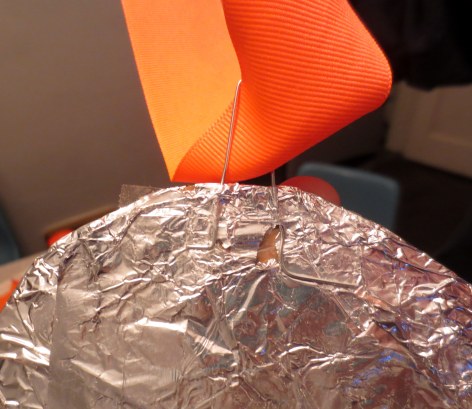 MOST LIFELIKE/SCULPTURAL:  At our last party, we had a couple of snacks that “looked” like something else – a cake that looked like a football field for gummy bears, and a salmon pate shaped like a fish: 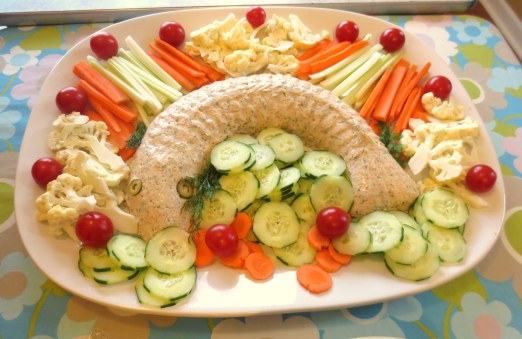 We created this category to encourage snack developers to channel their inner Jeff Koons. 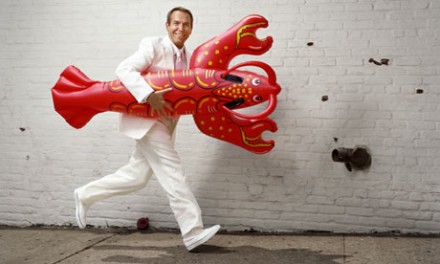 To create this award, I dug around in my tool box for a plastic chisel. I spray painted the bottom bright orange, creating the effect that it had been used to carefully sculpt a giant mound of Velveeta into a work of unspeakable beauty. 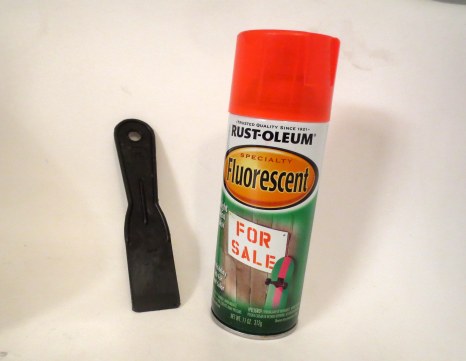 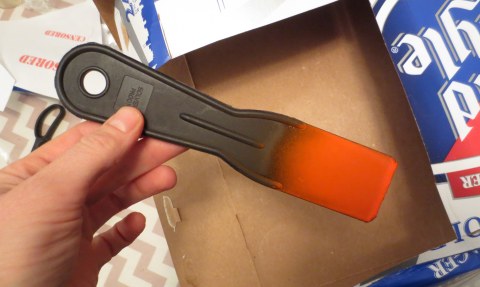 Now that you’ve made each of the “medals,” unroll your orange ribbon and cut it into four even strips – mine were each 3 feet long, since I had 12 feet of ribbon. 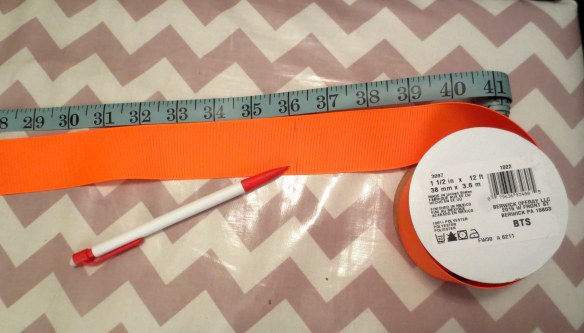 Use Stitch Witch to fasten the ends, then clip the medals on using the paper clips (or in the case of the chisel, through the hole at the top). 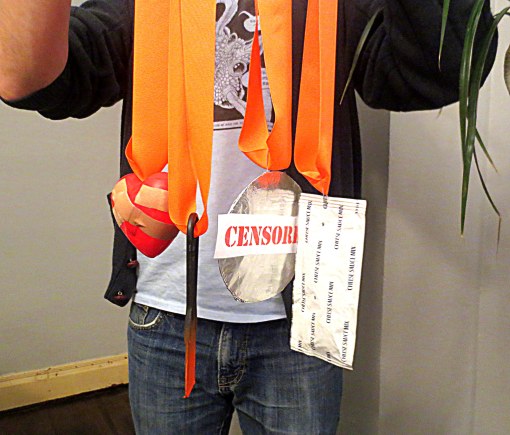 BEST OVERALL SNACK: Our hope was to swear in a new King or Queen of Snacks, a benevolent ruler of Greater Snackdom, the Fourth Earl of Cheese Balls. This honor was bigger than a medal – it deserved a crown. A crown of Cheesy Snacks. 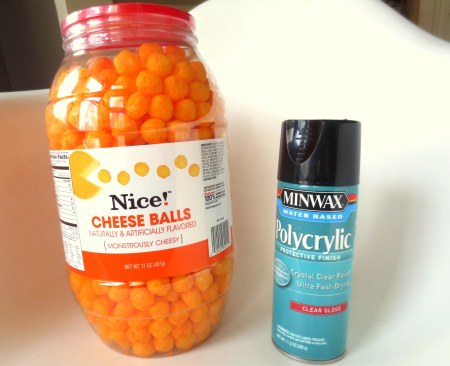 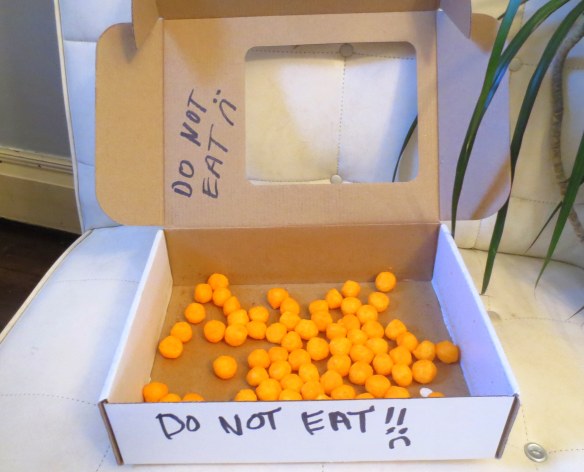 While the can of polycrylic is still shook up, arrange about 5 or 6 doritos on another box and spray the front of the chips. When they’re mostly dry to the touch, flip them over and spray the other side. Again, don’t let them get stuck to the box – give a little shake after a few minutes of dry time. 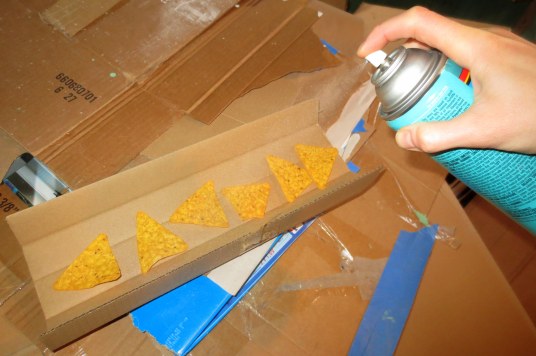 SAFETY TIP!  Keep the drying balls and chips away from your curious family. Remember that small children tend to be illiterate, and probably don’t know what “DO NOT EAT” means.* That would have been a fun call to the Poison Control Hotline: Well, you see, I was trying to make a crown out of cheese balls and Doritos and I forgot that my 3-year-old can’t read, and….”**

When the balls and chips have dried, grab a plain headband and fire up your glue gun. 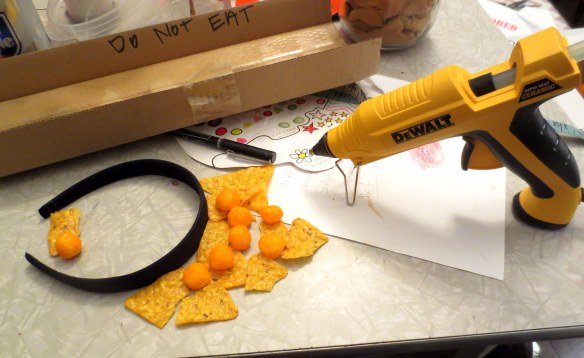 Dab a dollop of hot glue on a cheese ball and press it against the headband until the glue dries. Alternate with Doritos to create a jewel-encrusted effect. 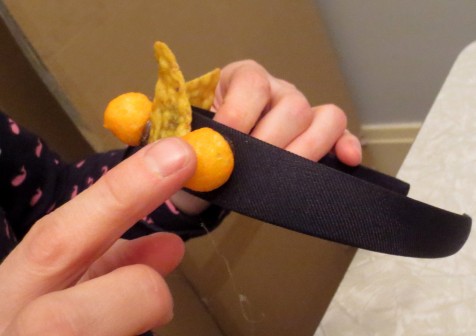 SO, WHO WON THE PRIZE?
In a Super Bowl of Snacks, everyone’s a winner. But some are more winnier than others.

MOST ORANGE:  Dang, I didn’t even get a picture of this snack, Vegan No-Cheese Dip with Spicy Vegan Soy-sage. Here’s the winner, avoiding paparazzi: 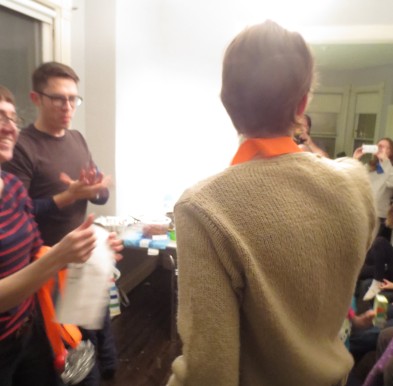 MOST UNHEALTHY:  Loyal readers may remember Megan, recipient of the “Snappy Birthday” plaque and perennial bringer of the best food to parties. She did it again with this simple but brilliant concoction: Caramel Cheetos.  Think about it. 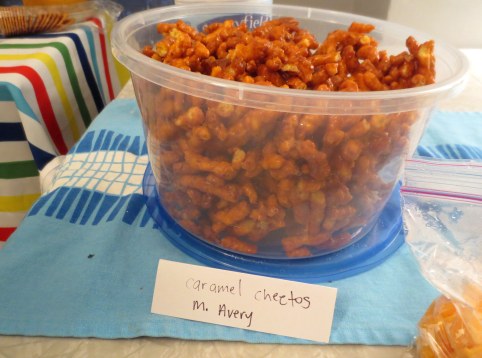 MOST SCULPTURAL/LIFELIKE:  If you are an American born in the 1970s, there’s a good chance your name is Jen or Matt. They are actually a lovely couple in our neighborhood who surprised us all by showing up with a bag of mushrooms.  I knew Jen and Matt were fans of healthy eating, but COME ON! 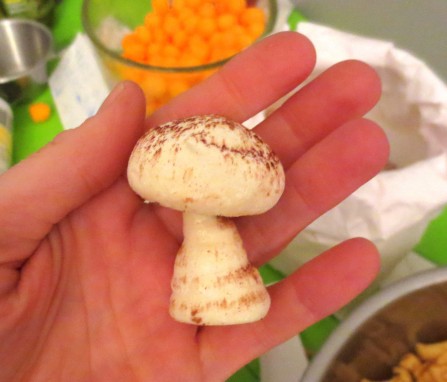 Turns out, those mushrooms are made of CANDY! No, really. Meringue Mushrooms are 100% sugar, disguised as fungus.

MOST OFFENSIVE: This being Chicago, we shouldn’t be surprised that the couple who created this award category also won the prize. Their snack was so offensive that I had to censor the photo of it. Let’s just say that we all had some pretty frank conversations with our children about human reproduction. Congrats, John and Julie! 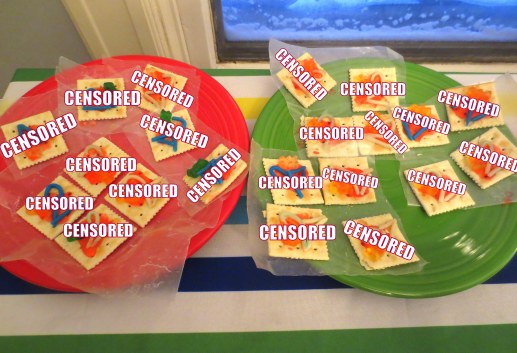 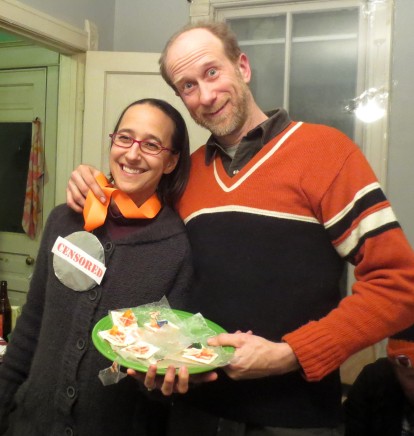 BEST OVERALL SNACK: This snack could have won in several categories, which is why it had to claim the crown: A cheese-and-toothpick replica of the Montreal Biosphère, designed by Buckminster Fuller for the 1967 World’s Fair. Note the use of carrots and parsley for the additional details. 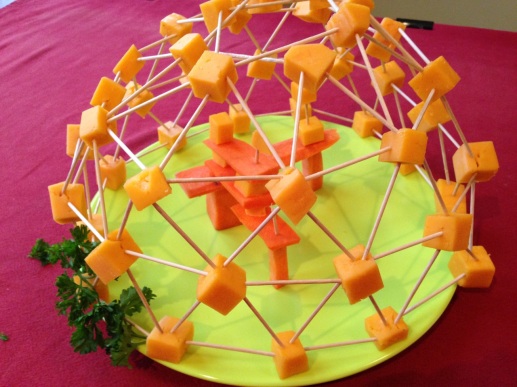 However, since winner Chris ran off to another party before the prizes were announced, the actual crown went to the second-runner-up, DONUT PIE – dreamed up by my 3-year-old and executed my me: 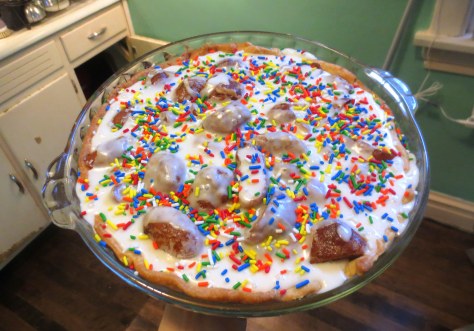 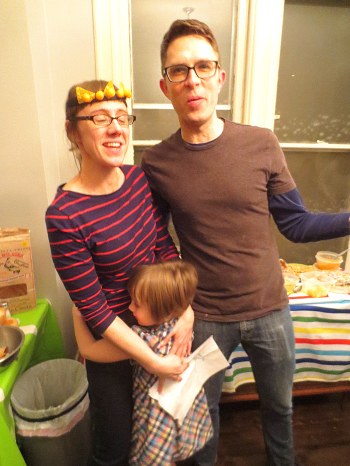 Which makes me, I guess, the Queen of Snacks. Congrats to all the winners!

** A couple of my more know-it-all friends have suggested that Shellac would be a safer alternative to polycrylic, since shellac is resin secreted by the female lac bug, on trees in the forests of India and Thailand, then dissolved in ethanol to create a liquid finish.

* We’re still wondering what happened to the entire pack of Trident gum he ate last year.