On a recent date night, Scott and I split a bottle of champagne at our favorite sushi restaurant, then stumbled the five miles home, strategically zig-zagging past every apartment we’d lived in.

I approached a young woman smoking on the front stoop of the 6-flat* I’d occupied when I first met Scott a decade ago. In the time it took her to finish that cigarette, I spun a frightening tale of my cheap, but (lowering my voice to a gravelly whisper) truly terrible apartment.

The first time I saw that apartment ($700 for a huge 3-bedroom!), a young couple with a baby were scrambling out the door, the old Polish landlady warning them, “This is no place for children!”

The place in question was heated by a “Visual Gas Flame Vented Room Heater;”  the apartment version of a burning trashcan: Hot enough at the core to melt lead, but a few steps away and you’re back in the tundra. My neighbor across the hall had snapped this blurry shot of the death furnace, featuring my two cats who – coincidentally – are now both dead.

Squint your eyes — this picture was taken before megapixels were invented.

We only shivered through one Chicago winter before moving up to a place with steam radiators — the apartment equivalent of a being hugged by a really warm panda bear. And, there’s no better place to hang your wet socks after a long romp in the snow.**

But, radiators are a design nightmare. Awkwardly-placed hunks of rusting iron standing between you and your Interior Design Fantasies. 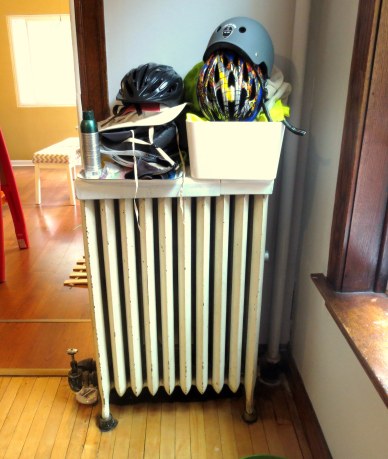 As usual, inspiration struck from the alley, where I spotted an IKEA slatted bed base: 16 birch slats stapled to two polypropylene ribbons (Sweden doesn’t allow box springs within its borders). The slats seemed about the size of my kitchen radiator, so I dragged them home and hid them from Scott while I planned my Scandinavian radiator makeover.

This is how I transformed my rusting old radiator into a light, modern shelf space. Drilling only four tiny holes in the wall, this project is not only beautiful, but very renter-friendly.

STEP ONE – CONDENSE THE SLATS: Clear off your radiator and place all that crap in the middle of the floor for your family members to trip over. Next, drape the wooden slats over your now-naked radiator. 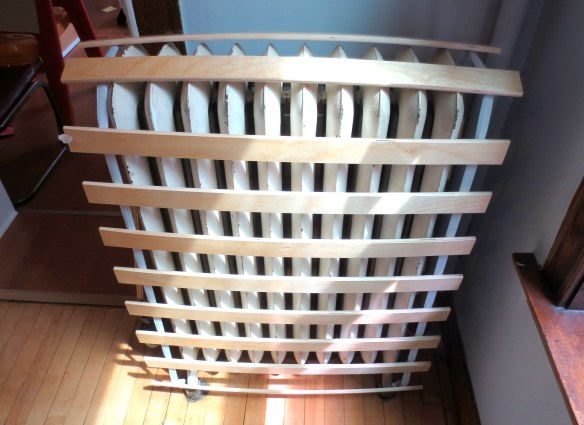 I loved the look – the blonde wood perfectly matched my kitchen’s cheap pine flooring. But the slats were too far apart to effectively hide my shame, and would look too much like a ladder to a curious three-year-old (or a drunk 38-year-old).

I measured the radiator, grabbed my staple remover, and pulled out all off the extra slats that had been draped over the BACK of the radiator.

Next, I placed the liberated slats in between the existing ones and stapled them to the ribbon.

The slats fit perfectly, but I worried that the two ribbons wouldn’t be strong enough to hold the now densely-packed slats. Remember, this product was designed to lie flat under a mattress, not to be hung by its ribbons.

I scoured the house for something strong, thin and flat, and then remembered that I had found a box of these promotional aprons in a dumpster last year: 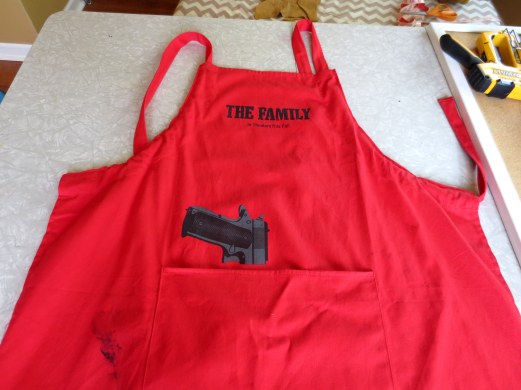 Since I don’t believe in the militarization of baking, I gave most of the aprons away, but still had one I could scavenge for the neck and back ties, which I stapled to the slats for reinforcement. 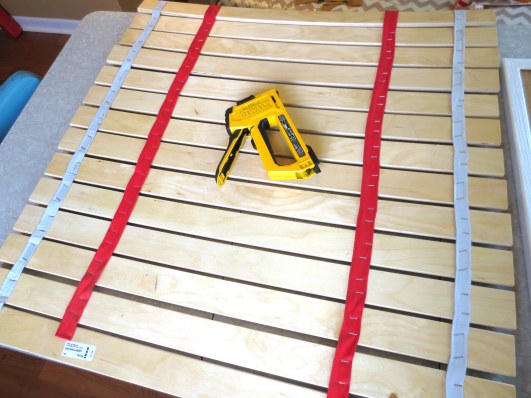 To attach the slats to the front of the radiator, simply tie the top of the ribbon and apron ties under and around the pipes (depending on your radiator layout), knot, and hope for the best.

Like anything from IKEA, these slats are sixteen times heavier than they should be, so ask a spouse or lover hold them up while you fasten the knots. And like all IKEA products, expect some sweating, swearing and struggling before it finally comes together.

STEP TWO – CREATE THE SHELF:  Shady developers are gutting the house next door, which means plenty of free scrap wood for me! Grab a nice piece of pine or birch (plywood is OK), and place it over your radiator to mark the desired width and length. You want it to be slightly cantilevered for a dramatic, Mies Van Der Rohe-inspired effect.  If necessary, mark a cut-out for the pipes leading to the ceiling:

PRO-TIP!! Have a little fun with your wood scraps before you begin the hard work of sawing it down to size.  Create a “bear trap” for unsuspecting family members by placing a cupcake, magic wand or a hardcover copy of the art of Jean Giraud Moebius under some precariously balanced planks: 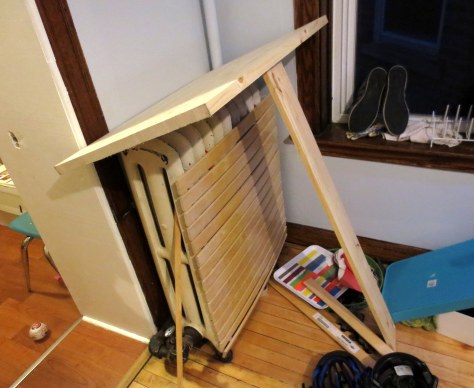 Use a jig saw to cut your wood down to size, including the pipe-hole.

To keep the shelf from shifting laterally, we need to install discreet “stabilization slats” on its underside. Find a piece of scrap wood and cut a couple of slices off that will fit in the space between the pipes. Mine were about 8 inches long and ½ inch wide. Drill wood screws to secure the slats to the bottom of the shelf – it doesn’t have to be pretty. 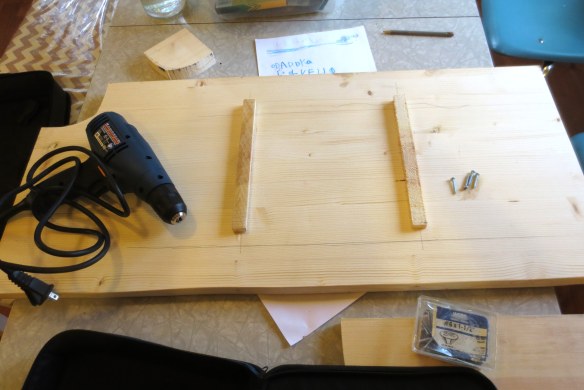 This is what I’m going for:

Sand the top and sides of your cut wood to a smooth finish:

STEP THREE – INSTALL SHELF BRACKETS: If you don’t have a good pile of scrap wood next door, head to the hardware store for an arm’s length of quarter round wood moulding. Cut two pieces: The first piece should be about the length of the wall where your shelf will rest. The second piece will be hidden, so who cares how long it is. After marking where your shelf will sit, drill the two pieces to the wall using wood screws on either end. 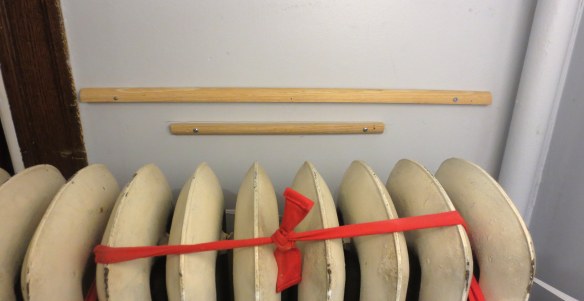 Slide your shelf between the two pieces of moulding to make sure the fit is snug. Take a few beautifully-staged pictures before your family starts to pile their crap back on top of it again! 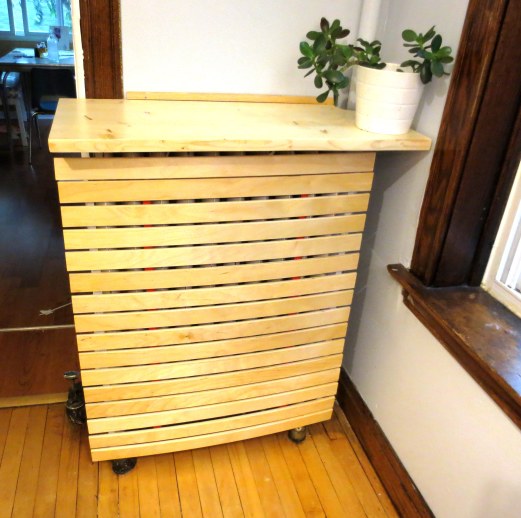 Discover all the new uses for your radiator cover. Display your collection of over-ripe tomatoes:

You’re only steps from the stove! Try a new recipe from the internet:

…Or invite a few friends over for cocktails. Discuss who among you keeps leaving bottles of Costco Vodka behind: 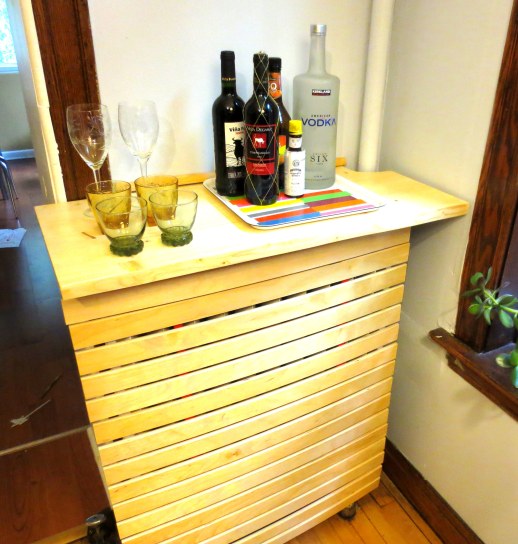 * Six-Flat is Chicago-talk for a building with six apartments: Three stories tall (if you count the basement), and two apartments deep.
**  Projectophile does not condone hanging wet socks on pandas. They’ve got enough problems already.