In our last round of metaphor abuse, I proclaimed that the Front Door is the Smile of Your Home. If so, what does the bottom of the front porch represent? Perhaps an acne-covered chin, full of warts, with little hairs poking out.

Two minutes of Googling™ revealed that the area under the porch floor is actually called “skirting.”  Which has much more potential for salacious double entendre than, say, chin.

Loyal readers know that I’ve spent most of the last year agonizing about the front of our house, a condition I’ve self-diagnosed as the Google Street View Effect©. 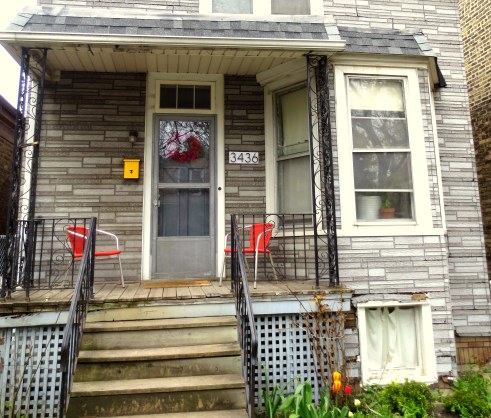 Due to the presence of both tulips in the yard and a Christmas wreath on the door, I can’t quite tell when this picture was taken.

A couple months ago, I lost my patience with the rotting, peeling, pale blue lattice skirting  our porch.  I tugged at it a bit, the way that one casually tugs on a scab or a loose tooth or stray body hair, JUST TO SEE HOW EASILY IT MIGHT COME OFF.* And then, I pulled a little harder, until…. SNAP….the whole panel popped off in one satisfying yank.

And since the pulling-things-apart itch is hard to fully scratch, I yanked chunks off the “cosmetic” horizontal molding. 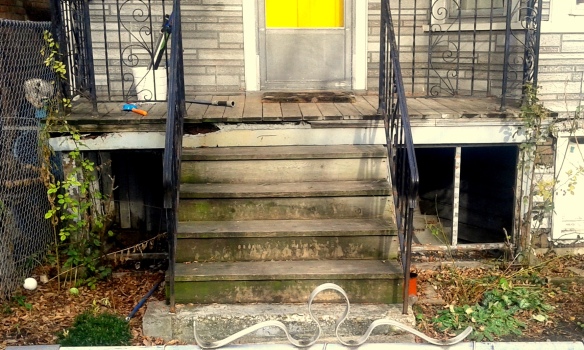 I could have stopped there and let our UnderPorch (you know, like MiddleEarth) breath freely. But now that I could stick my whole head in there, I saw that our UnderPorch was actually the capital of a very sophisticated Rat Civilization. And smelled like it, too.** 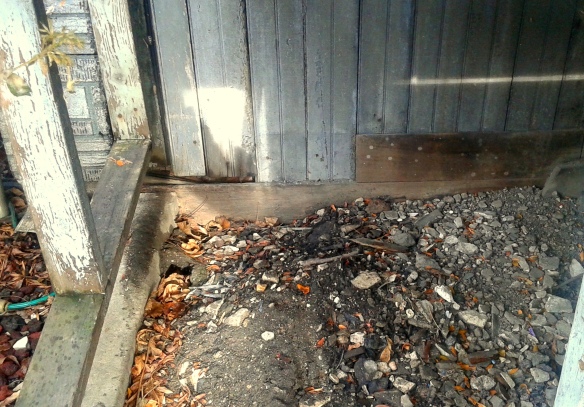 The Easy Cover-Up Plan was to simply nail new lattice across the support beams. However, we couldn’t seal off the UnderPorch since we still needed to disinfect the pee smell, insulate the exposed house walls and keep the area permanently accessible to our colony of feral cats (more on them another time).

The best part of wearing a skirt is taking it off. So I devised a system of removable screen frames that could provide both cosmetic screening and easy UnderPorch access.

STEP ONE — BUILD THE FRAMES:  Since they would be hanging from hooks, which are in turn hanging off a porch of dubious structural integrity, the skirting screens had to be extremely light.  We headed to the big box store and bought 1″x2″ pressure-treated boards, plus a 50-pack bundle of 4-foot lath. 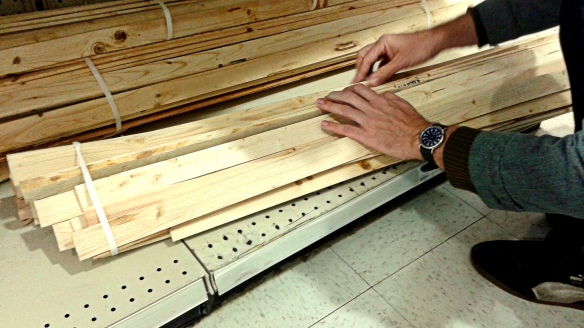 The first step in any woodworking project is to borrow your neighbor’s chopsaw, which spends most of its time at our house and is very confused about who its family is. I cut the lath down to size, gave them*** a light but firm sanding, and coated them on both sides with water sealer. 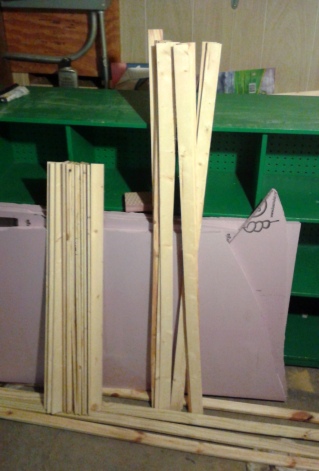 While the lath dried, I cut the 1″x2″ boards to size and screwed the ends together with 2½ deck screws, leftover from our fence project. One side of our porch is bigger than the other (ladies, you know the feeling), so for the bigger side I screwed an extra vertical beam in the middle to keep the lath from sagging with time (again with the body issues). 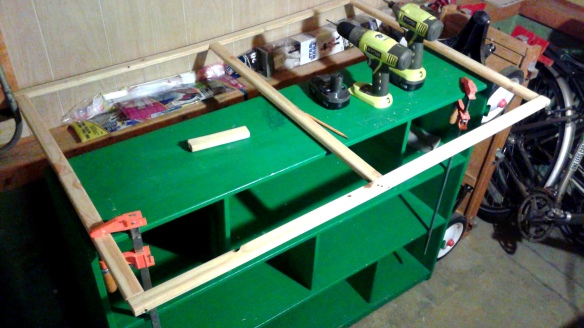 If you’re wondering why the photo resolution has taken a sudden, steep drop in quality, it’s because Sam dropped my camera in a bucket of soapy water and sawdust. From now on, these are all cell-phone pics.

I used a pneumatic nail gun to staple the lath to the frame. 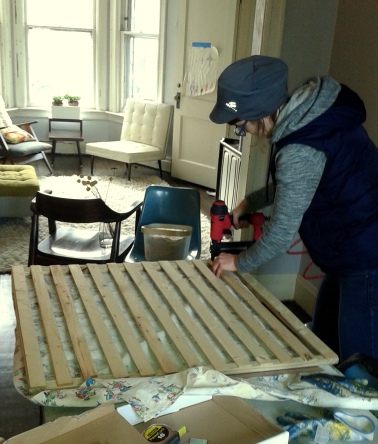 Many of your cheap lath boards are sure to be stained or disfigured, so try to make the best of it. In the spirit of American Thanksgiving,**** I grouped the “dark meat” and the “white meat” together to give the whole wood platter a delicious sense of balance.

Finally, I screwed hooks onto the top of the frames. 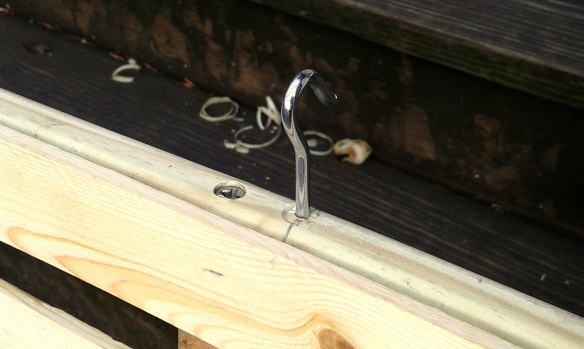 STEP TWO — FIX THE PORCH:  With the hooks screwed in, we needed a place to screw the eyes, or as I call them, the “hook holes,” which makes a lot more sense than “eyes,” because repeatedly sticking a “hook” into an “eye” sends the wrong message to children.

We had already purchased an attractive 1″ x 6″ x 12″ board to replace the outermost “molding” on the front of the porch. However, when we fully pulled off the rotting molding, we discovered that the structural beam under that was also rotting! 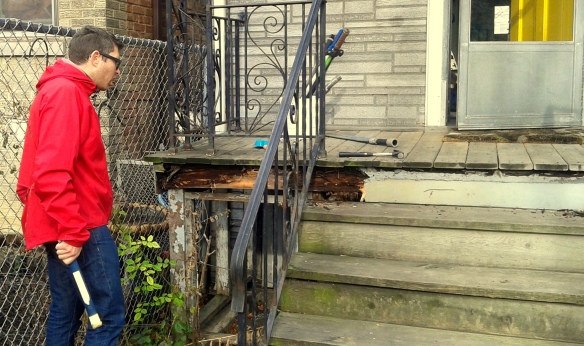 AND THEN we discovered that the structural beam housed a colony of winged carpenter ants, which look a lot like termites. It’s unclear how this porch is still standing, but for sheer willpower. 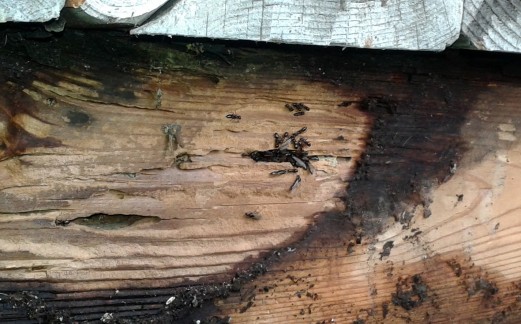 Faced with an unexpected Russian Nesting Doll of rotten beams, Scott rushed off to the hardware store and brought home this bad boy:***** 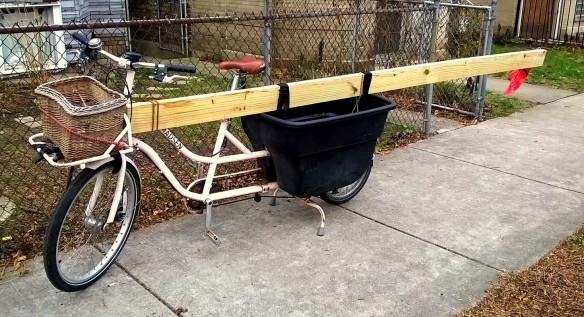 The red flag tied to the back is a nice touch.

Clearly, this is not how we all planned to spend Sunday afternoon. Hey look, there’s Josh again, who always seems to wander over in the middle of a Home Improvement Crisis. 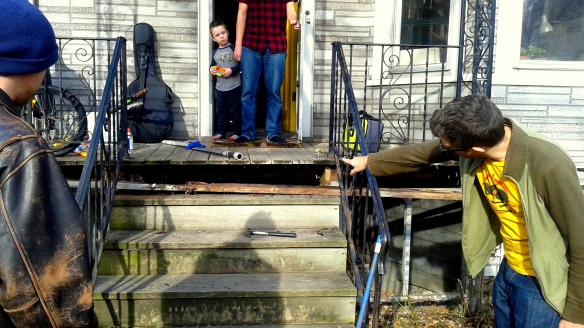 We poked and prodded til we found some solid wood to screw the beam into. And then screwed the outer beam on top of that. Looking better already! 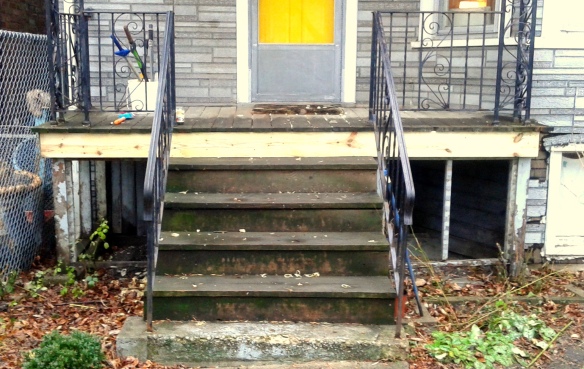 Whew. The final step, positively facile in comparison, was to screw the corresponding hook holes into the outer beam.  I held my breath as I gently slid the hooks into their waiting holes, hoping that the plan actually worked: 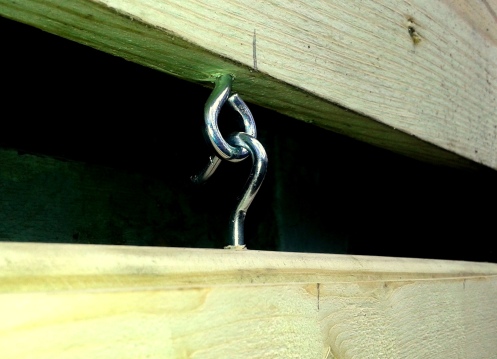 Fresh from his nap, my precious 4-year-old camera-destroyer came out to pose for the “after” pictures: 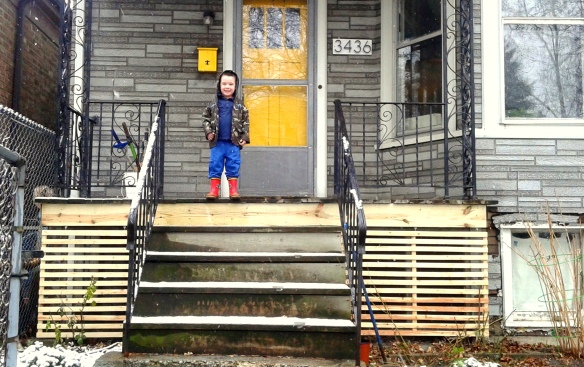 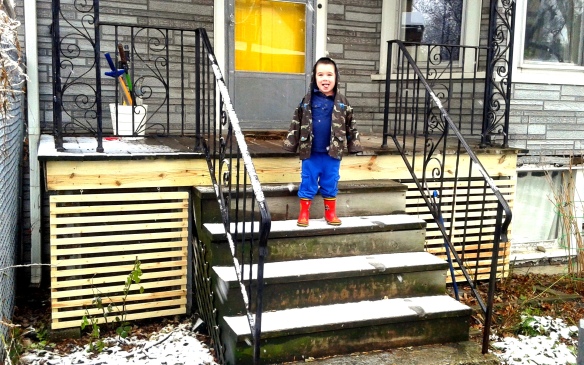 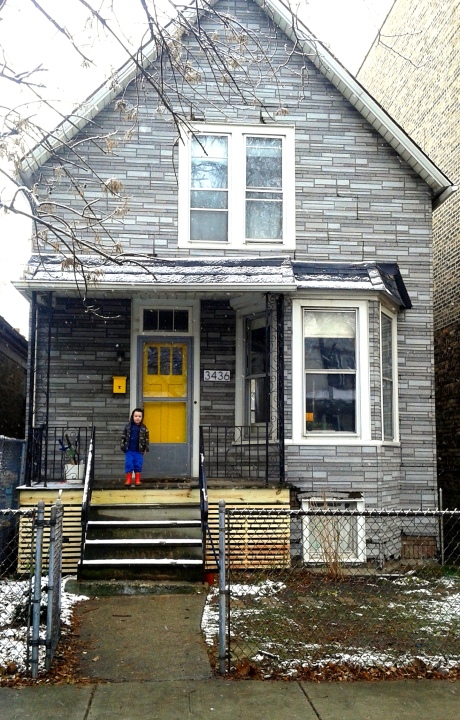 —————————————————
*  As Scott can attest, since we’ve lived in the Babushka House, I’ve developed a particularly destructive habit  of pulling on various parts of the house, “just to see what happens.”
** The smell of rat droppings is similar to cat droppings. That is, if your cat lived on a diet of rotten donuts, cigarette butts and dog poo.
*** I just decided that the plural of lath is lath. Like deer or moose or fish. You know, all the recreationally hunted animals.
**** We recently hosted Canadian friends for Thanksgiving dinner and learned that Canada is a different country with its own proprietary Thanksgiving. So I developed the habit of saying “American Thanksgiving,” which both avoids confusion and makes me seem Sophisticated and Worldly. It’s fun to greet friends and family with “Happy American Thanksgiving!” or ask, “How was your American Thanksgiving dinner?”
***** Our marriage contract dictates that I must show you at least one photo of Scott’s Extreme Husbanding in each blog post.