Having two bathrooms for a family of five is a major life accomplishment, which we achieved exactly 1.5 years ago when we bought the Babushka House. The timing was perfect: Our youngest was potty trained,* and now five fully-formed humans all needed to use a toilet, usually at the same time.

Babushka’s downstairs half bathroom was tiny and yellowed with nicotine,** but had the tools to get the job done. And so, so many shiny gold towel racks: 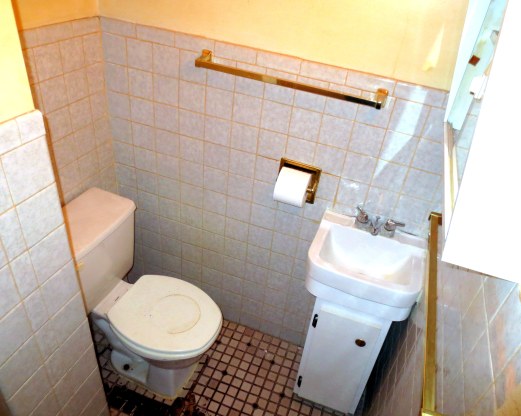 The excitement of Double Bathroom Achievement was short-lived, once we realized that the mystical Second Toilet was falling through the floor:

For years, upstairs bathroom had been inflicting water torture onto its smaller cousin below; the incessant leak destroyed the ceiling, and rotted out the bathroom’s sub-floor. Sitting on this toilet felt squishy and wobbly, as if the slightest (ahem) strain or push might send both the toilet and its passenger tumbling into the basement.

The first step was to pull out the toilet, tear up the rotting sub-floor and build a new one.

I’m quite proud to add “Sub-Floor Artist” to my resume! Note my visionary interpretation of where the toilet base and water supply line should go. Feel free to add to you Pintrest page of Bathroom Sub-floor Inspiration. 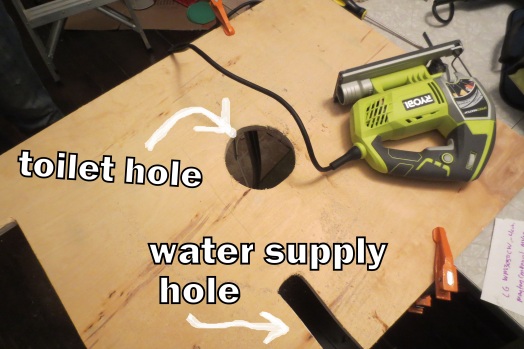 The easiest part of this project was choosing the tile: a modern-yet-traditional two-toned scheme. But Scott and I were devastated to learn that we couldn’t just throw new tile down on the sub-floor. First, we had to buy, measure, cut and install cement board, which is like drywall for the floor, only scratchier.

Next, we had to conduct a “dry fit”, which is like a game of musty Tetris™ where we cut the tile to match our weirdly shaped bathroom. Note that our bathroom is extra weird because you have to go through the bathroom to get to the basement.  And surprisingly, I’ve only once walked in on a house-guest with their pants down (not pictured). 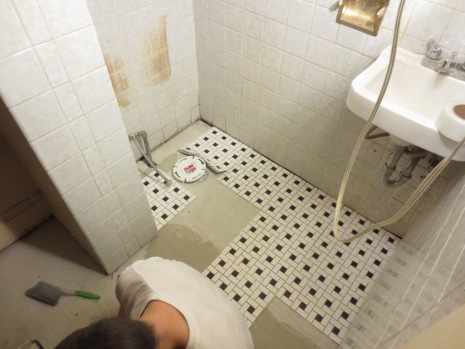 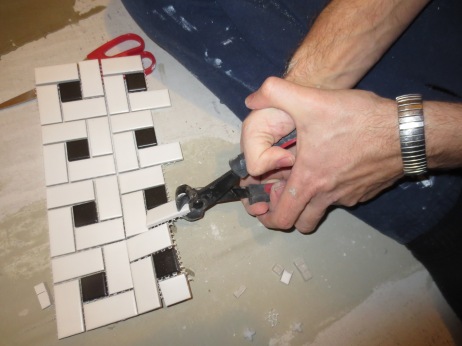 This tool is also useful for the annual Springtime “Dad Pedicure.”

With the tile layed out, we mixed up some thin-set mortar and schmeared it generously across the cement board like cream cheese on a bagel.

Then we (meaning, Scott) quickly and carefully arranged the tiles over the mortar like, um…. lox and capers and delicate slices of cucumber and red onion. ***

After the tile was set, we (meaning, Scott) mixed up a batch of grout, which is sort of like mortar, but scratchier, and fills in the space between the tiles. We intentionally chose dark grey, which is the color of white grout after you haven’t cleaned your bathroom in five years:

Spread the grout all over the tile and rub it into the cracks like lotion on a dry elbow.  Then wipe up that huge stupid mess you just made in the bathroom with a comically-big sponge: 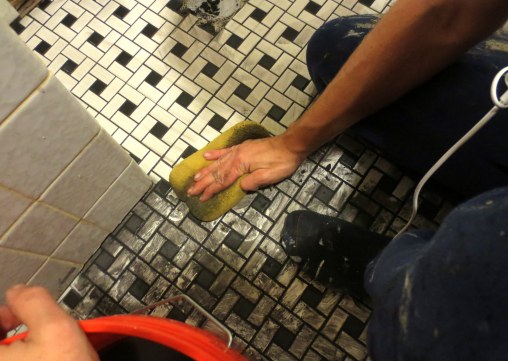 While waiting for the grout to set, it was time to shave 50 years of other people’s nastiness from the base of the toilet, which was resting sideways in our kitchen.

That brown stuff that looks like the turds of a carnivorous drifter is really just a petrified wax ring. Or, that’s what we kept telling ourselves. 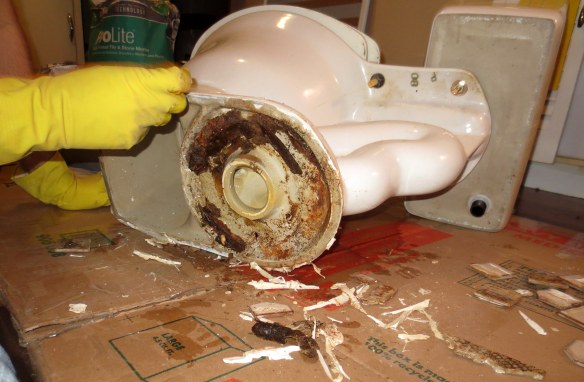 We (Scott) then installed a new wax ring and flange — pronounced the French way, FLÁN-JAY —  and somehow got the toilet back onto its original hole. A fresh coat of caulk around the base adds a touch of class.

With the new floor installed, our micro-bathroom was now mostly functional! 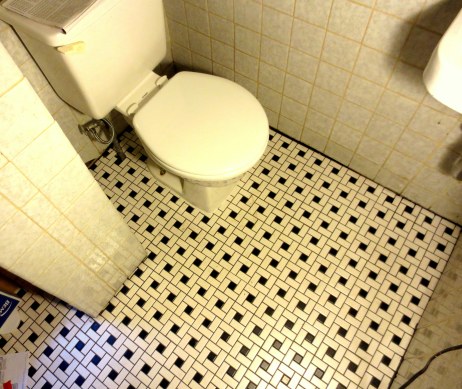 After all that hard work, Scott and I decided to take a little breather before tackling the walls and ceiling. That “little breather” lasted more than a year. Did we ever “finish” the micro-bathroom makeover?  See how it all ends in Part 2…

——endnotes——
* Some of you may be offended by the authoritarian tone of the term “Potty-Train” so instead we might say, “Defecation Education,” “Urination Leadership Initiative,” “Juvenile Flow Control Systems Support,” or “Human Waste Disposal Enlightenment and Direction Understanding.”
** I imagine when Babushka and her family bought this house in the 1950s, it was considered quite glamorous to smoke on the toilet.
** Metaphor Alert! Please do not attempt to schmear mortar on a bagel, or cream cheese on your cement board floor, or onions or smoked fish on top of any home improvement project.