For the last few years, whenever my mother and father would visit from St. Louis, they would bring along several boxes of linguine, which they believed was not available in Chicago. You see, a few years ago, we made the mistake of taking them grocery shopping at a local store called Cub Foods that was in the process of closing down (talk about bargains!).

The place was pretty picked over; the pasta aisle was decimated, and we left without getting the linguine we needed for my mom’s world-famous shrimp scampi.  Since then, parents believed that linguine was not to be found anywhere in the Chicago area and must be smuggled in from St. Louis.

By the time my parents came to visit us this weekend, we had finally convinced them to leave the linguine at home. But they did arrive with plenty of other treasures from their homeland:  A case of Old Milwaukee, a giant bag of chocolate chips, a handful of Hot Wheels cars, a box of Cheez-Its, a can of prunes and a bottle of prune juice.* Oh, and a pack of new underwear for each child.

All the staples of a well-balanced Midwestern diet.

The next morning I was plugging away at my “day job,” casually ignoring the children, who were high on new underwear and race cars and prune juice (which has more sugar than fiber, by the way).  I returned to the dining room/studio to find that Scott had made a mini-NASCAR track out of the case of Old Milwaukee.  The kids played racetrack for hours and hours. And hours. And more hours.

It will surely be remembered as the Greatest Toy of All Time, and it took my brilliant husband about three minutes to make.

Since I wasn’t able to personally document the creation of this cardboard masterpiece, I’ve provided a detailed re-enactment as a public service to Projectophile readers. Christmas will be here before you know it!

MAKE A TOY RACE CAR TRACK OUT OF A CARDBOARD BEER BOX
You will need:
— A case of Old Milwaukee. Milwaukee’s Best and Natural Light are acceptable substitutes.
— Corrugated Plastic or More Cardboard
— Scissors, X-acto Knife and Tape

STEP ONE:  Take the beer out of the case. If you can’t immediately drink 18 cans of Old Milwaukee, store in the refrigerator for future use.

I’ve been serving leftovers for 5 years. The original meal has never been found.

STEP TWO: Tear off the “handle” in the center of the box’s top panel.  Then cut about three inches into one side of the handle hole, so you can pull the panel up a bit.  You may need to cut slightly more, depending on the clearance your cars will require.

STEP THREE: Grab a piece of corrugated plastic that you found in the alley and used in your kid’s Refrigerator Halloween Costume. Alternately, try cardboard or — Scott’s favorite substance ever — foam core board. Cut the plastic or cardboard it so that it is slightly wider than the opening at the top of the box, and long enough so the cars don’t just hit the ground and bottom out (our piece was about two feet long).  If you’re using the corrugated plastic, use the x-acto knife to cut a slice halfway through the plastic, leaving the back unsliced, so that it bends upward. If you’re using cardboard, skip the cutting and just bend it. 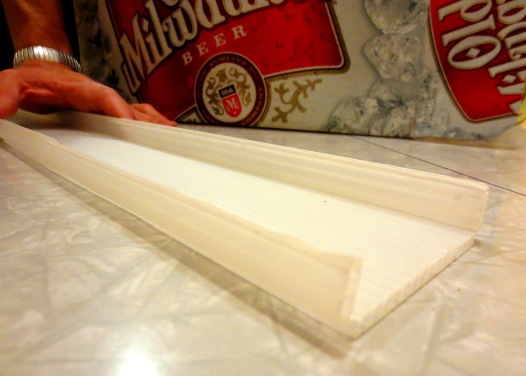 STEP FOUR:  Open one end of the box, and slide the plastic ramp into the top hole. 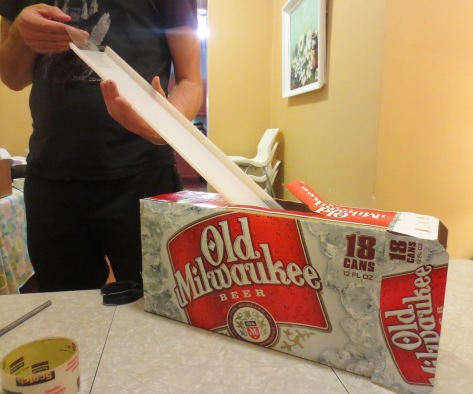 Use packing tape to tape the end of the ramp flush with the carboard top.

SCOTT’S PRO-TIP: A real man separates the tape from the roll by biting it off, not by using the dispenser. We lost the dispenser a long time ago, anyway.

STEP FIVE:  For extra stability, reach into the box and apply more tape to the underside of the ramp where it meets the opening. Sorry guys, it’s hard to take a picture of the inside of a box, but you get the idea:

STEP SIX:  Release your Beer Box Car Ramp into the wild of your children’s play area. Your work is done. Now it’s time to sit back and relax with a cold beer and a box of prunes.

* Prune juice? Yes, my children eat like old people. Estelle loves to snack on prunes, and when she was in the hospital this summer, she ordered prune juice for breakfast. This incident has been a source of delightful giggles for our family ever since.