For several months, my four-year-old insisted she wanted to dress up like a letter for Halloween. Yes, a letter. As in, “This letter states that, due to an overdue library book, you never actually graduated college.” *

To our younger readers: If you get something like this delivered to your house, it may be a letter.

This past weekend, Estelle “flipped her mind” and declared that she wanted to dress as a princess instead.  A Princess! Within seconds, big brother and I delivered an onslaught of white lies in order to shield her from the Princess Industrial Complex  (despite the fact that her last name means “King” in Poland, she’s not next in line for the Polish crown).

“You don’t want to be a princess!” Max declared. “Everyone else is going to be a Princess.” I took the deceit a step further: “You know Biscuit, there is a strict limit on the number of Princesses on Halloween, and all those spots are already taken.”

Satisfied with our explantion, Estelle spun around, pointed to the refrigerator and said, “I want to be that! A white frigerator!”

A few minutes later, I left the house to run an errand.  I immediately found most of our costume supplies in the alley within about 50 feet of our back gate.  A pile of barely-used medium cardboard boxes:

Red arrow indicates the part you should remove.

Once the supplies were secured, we had to start making the costume at once — before Estelle flipped her mind again.  To further seal the deal, it was critical to involve her in the (non-toxic) aspects of the refrigerator assembly.

HOW TO MAKE A WHITE REFRIGERATOR COSTUME MOSTLY OUT OF STUFF YOU FOUND IN THE ALLEY:

STEP ONE – SIZE: Determine the approximate size of your child’s head by matching it with a similarly-sized serving bowl.

Trace the hole on the top of the box, but cut it in an oval shape instead, because human heads are slightly longer than they are wide.

Determine the placement of arm holes, and cut those, too. 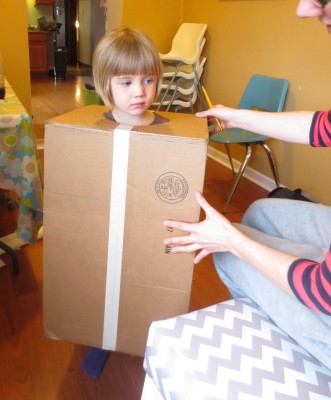 STEP TWO – PAINT:  Remove your child from the box, and peel off any stray stickers and loose tape. Cover your box in a coat of oil-based white primer and allow it to dry for a couple of hours in a well-ventilated, child-free area.

Then, go fetch the child and a bucket of white latex (water-based) paint. Teach her to paint with a roller brush.  Barely hide your emotion as she smears paint in her hair, just like Mommy!

STEP THREE—STOCK THE FRIDGE:  Ask your mother-in-law to save the grocery ads from the Sunday paper. Squeal with delight when your husband brings home a Kraft® “Holiday Entertaining Guide” from 2009 that he found in the cafeteria at work. Instruct the kids to cut out pictures of food, and try not to comment when they only cut out beer, soda and processed cheese products.

We found that the pictures in many grocery ads were just too tiny. To supplement, we cut up packages of food that we actually eat.  Like butter. We eat lots of butter.

Use silver (standard-issue) duct tape to create four “shelves” and glue the groceries in place. I recommend using a glue stick, since liquid glue causes thin newspaper clippings to wrinkle and warp.

STEP FOUR – SEAL:  Once the glue has dried, coat the whole box in a thin layer of Polyurethane varnish. The varnish will give your fridge that factory-fresh shine, and provide protection against rain, snow, snot and tears – the natural enemies of cardboard. 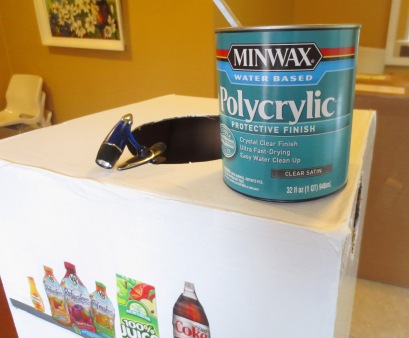 STEP FIVE – DOORS:  We happened to have a piece of white corrugated plastic that Scott found in the alley and just “knew” we would have a use for someday.**  This stuff is as light as cardboard and infinitely more durable.  I cut out two pieces and, since they were translucent, covered them in white duct tape.  Alternately, use two spare pieces of cardboard cut from the bottom of the box, and prime, paint and varnish them as we did in Steps 3 and 4.  Or cover in white duct tape. Your choice.

We scavenged door handles from an old dresser in the alley, but they can be easily found at any hardware store or IKEA-type place. Screw your handles into the center of each door, where… you know… handles ought to go.  Cover the back of the screws with duct tape so they don’t scratch your representations of food.

Use MORE white duct tape to attach the doors, taping both the inside and outside “hinges.”

STEP SIX – CLASSY FINISHING TOUCHES:  After you tape the doors on, you may notice their tendency to swing open uncontrollably. Attach two little pieces of adhesive Velcro discreetly over the shelves, and then attach their grabby mates on the back of each corresponding door.

What refrigerator isn’t complete without a light?  Re-appropriate your husband’s $2 clip-on reading light that he forgot he had and never used anyway.

Use an X-acto knife to cut a tiny hole over the top row of food, and somehow tape your little light to the inside. I briefly considered just clipping the light onto the neck hole, but then remembered that Estelle will mindlessly chew on anything within biting distance. Best to keep electronics and hungry preschooler mouths apart. 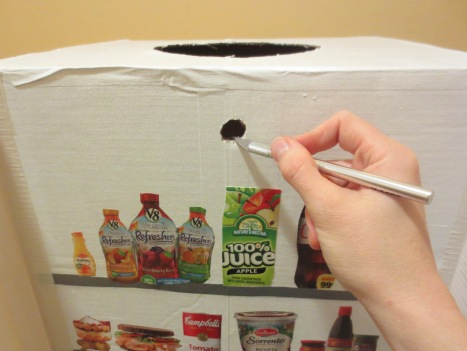 Take a couple of pictures of the appliance before your kids mess it up again: 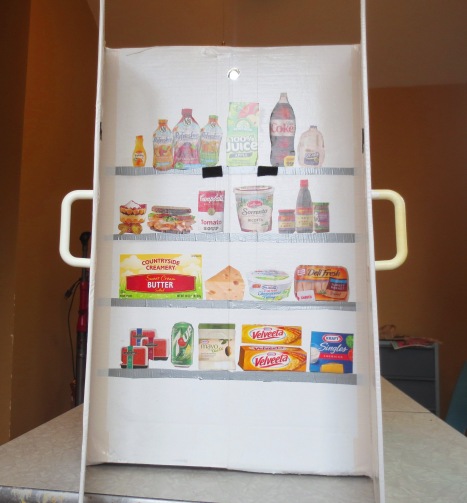 PRO-TIP!  Before Halloween, give your child plenty of time to acquire the muscle strength that it will surely take to keep her arms in that position for several hours —  while also holding a pillowcase full of candy. 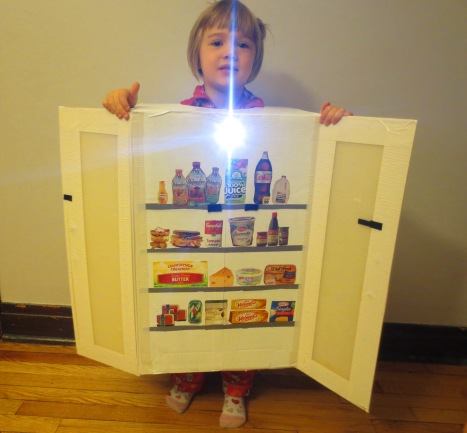 ** Normally, aspirational hoarding is discouraged in our household, but this time it worked out pretty well.