Today, everyone’s a winner, because all three of these answers are correct! I realize this is awfully confusing, so please, let me explain.

I grew in St. Louis, Missouri, a mid-sized mid-western city. Even though we weren’t cut off from the rest of civilization by, say… an unpassable mountain range, or 5,000 miles of ocean, St. Louisans have developed our own unique and often perplexing culture. Our steaks are made of pork; we deep fry our ravioli. St. Louis children must tell jokes on Halloween before candy is released. In school, we learned that the St.Louis World’s Fair of 1904 was the apex of innovation, because this is where the ice cream cone was invented. You’d all still be eating ice cream out of bowls right now – like savages – if it weren’t for St. Louis and our culture of advanced dessert engineering.

Like other lost civilizations, St. Louis developed our own secret dialect, which includes the word “Hoosier.” In St Louisian, Hoosier is an insult, but it has nothing to do with Indiana. In fact, most of us have never even heard of Indiana (it may as well be one of those other “I” states like Idaho or Ithaca). A Hoosier is related to a Redneck, but he’s not agricultural; he lives in town. He’s not from a particular ethnic group, because every family has at least one.*  The St. Louis band MU330 says it best in their hit song, “Hoosier Love:”

It wasn’t until I was 23 years old and newly living in Chicago that I learned the hard way that – to the rest of the world – a Hoosier is simply a person from Indiana. Oops. Sorry, Lisa. Your hair is great!

Fifteen years later I discovered the third definition of a Hoosier, as in the kitchen cabinet. I desperately needed some proper counter space to fill the gap between the fridge and the stove, occupied by an old Ikea desk:

After browsing Craigslist for weeks, I scored this vintage Hoosier cabinet for $70. Scott hopped in the cargo bike to pick it up, in the middle of a rainstorm:** 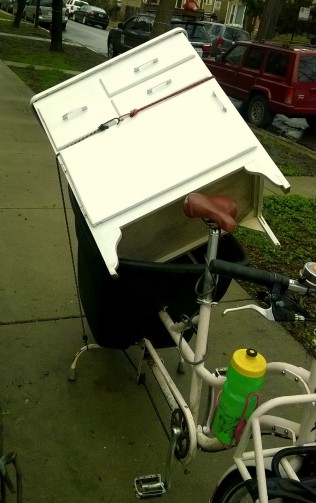 In order to amuse my St. Louis friends and family, from here on I will now refer to the cabinet simply as “the Hoosier.” Because there’s one in every family.  The Hoosier fit well into the gap-toothed smile of my kitchen, but it still needed work. Here’s what I did:

The upper left side drawer is what’s called a “bread drawer,” a typical feature of the Hoosier, from a time when homemade bread was important enough for its own all-metal executive suite. This particular drawer is also a great way to give your family tetanus via sandwiches.

I scrubbed out the rust with a wire brush, and painted the bottom with an oil-based protective enamel paint, specifically for metal, which I already owned. 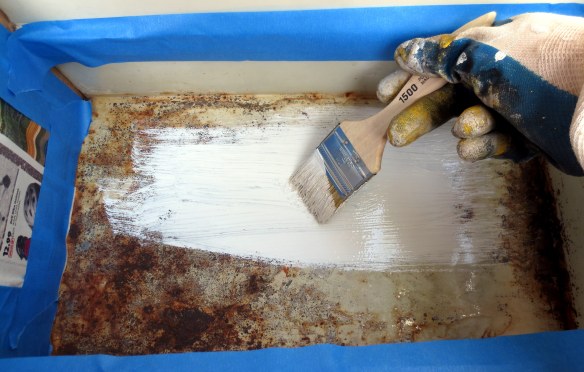 My store-bought loaf is feeling a little inadequate in this cathedral to yeasty goodness. Maybe I’ll just store towels in there.

The Hoosier had three more big flaws: 1) it was not quite tall enough to stand shoulder-to-shoulder with the stove, 2) it was blocking a wall vent near the floor, and 3) it was hard to move. Why would we need to move a Hoosier? Because within the first two days of owning the Hoosier, we dropped about 30 grapes, half a cheese sandwich and some child’s school pictures behind it.

The answer to our all Hoosier problems is (are?) CASTERS!  Present-Day-Me is so grateful that Me-From-A-Year-Ago yanked these casters off some junky furniture in the alley, just in case I might need them someday. Because that someday is today!*** 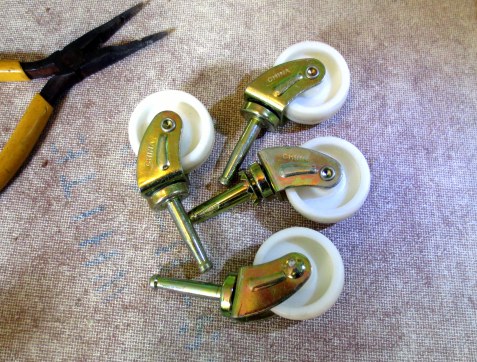 I flipped the Hoosier over and drilled holes in the bottom of its legs (feet?), starting with a small drill bit and gradually getting bigger, as not to shock and crack the surrounding wood. 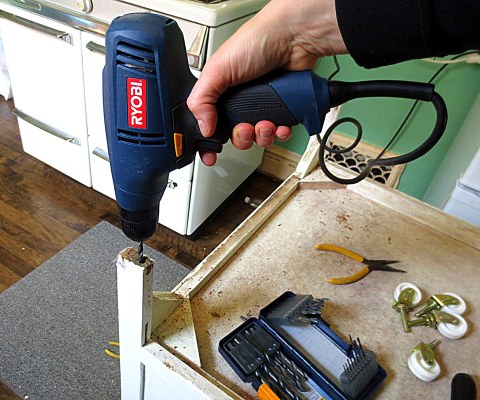 Since the top pins weren’t threaded, I wanted to make the casters extra secure. I filled the holes up with caulk and then pushed the casters in, wiping away the excess caulk that oozed out the sides.

I let the caulk set for an hour before flipping the Hoosier back over and rolling into place: 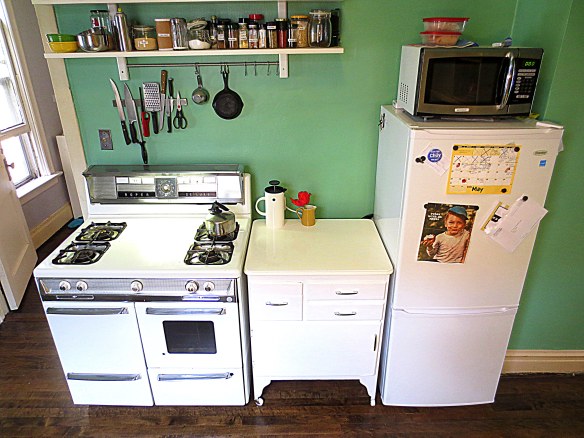 A perfect fit.  And look at all this extra storage! I no longer have to store my mismatched Tupperware and ratty old dish towels out in the open like a… well… a Hoosier.

To celebrate another milestone in the progress of the Babuska kitchen, I assembled this cheesy photo collage from the last six months:

A microwave on a stack of stolen milk crates?!  Now, that’s HOOSIER!————————————————————————
* If you don’t know who the Hoosier is in your family, it’s probably you.
** Our marriage contract specifies that Scott must appear at least once in every blog post, either as the hero of the story, or in the act of doing something that would “make all the other husbands look bad in comparison.”
*** If I ever run for political office or become an inspirational speaker, my slogan will be “Someday is Today!”

4 thoughts on “Is there a Hoosier in Your Kitchen? Take This Free Online Quiz to Find Out”