Every block in an older neighborhood has that one house. You know the one I’m talking about – the house that nobody ever comes out of or goes into. The grey, torpid structure with the sagging porch, the creeping vines; You can almost smell the mothballs from the street. The one that’s TOTALLY HAUNTED.

As a child, you threw rocks at this house, or rang the doorbell just to see who would answer it (and then promptly hid in the bushes).  Yup, that’s the house that we bought. 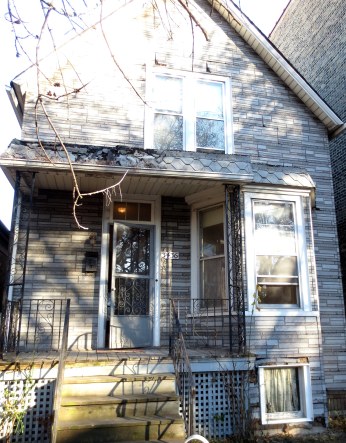 I’d be lying if I said it didn’t bother me.  After we moved in, Scott and I spent many evenings on the front porch eating ice cream, just to show our new neighbors that the house was occupied by actual living people (who now live directly behind a Baskin-Robbins!). Would ghosts eat ice cream, outside, in December? No. Ghosts hate being cold.

Now that spring is here, I’m even more self-conscious about our neglected Babushka House. We’re slowly saving up for big renovations like windows and siding. In the meantime, I discovered few small, nearly free improvements that – like a shot of atropine into an unresponsive patient – could quickly bring signs of life to our front porch.

These improvements fall into two categories: 1) Out with the Old, and 2) In with the New.

OUT WITH THE OLD!

• TEAR DOWN ORNAMENTAL CLIMBING VINES:  A TV series called “Life After People” predicts how nature will reclaim our human structures after we all mysteriously disappear. I’ve never actually seen the show, but I’ll go ahead and spoil it for you: After the humans are gone, plants start growing on and in the buildings.  Oh look, here’s an example:

I don’t care if those vines are alive or dead (ours were dead). Tear it down. It’s tremendously satisfying.

• DISMANTLE “OLD LADY” GRILLS:  These door and window grills recall a forgotten era – when fussy, ornate ironwork was all the rage, and when our neighborhood’s (and the nation’s) crime rate was a wee bit higher. 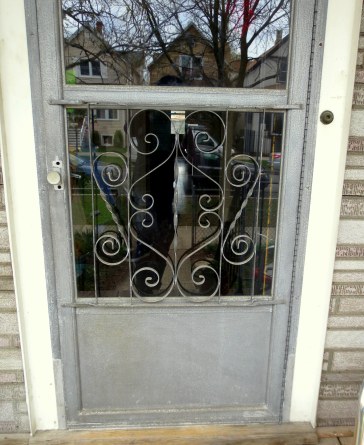 Fussy and ornate is clearly not my style. But even if it was, the metal was tarnished and crusty with age: 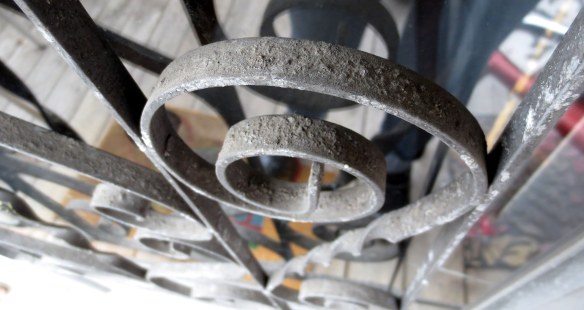 Two minutes with a screwdriver was all it took. Which is why these make no sense as a security measure, either.

IN WITH THE NEW!

• MAKEOVER THE MAILBOX:  Yes, the Babushka’s mailbox is perfectly good. It holds mail, and is squeaky enough to provide a audible clue that the person stomping around on my front porch is the mail carrier.  But the faded paint and rusty patina are the opposite of cheerful:

Unscrew the mailbox from your wall. Don’t be spooked by what appears to be the capital of a small but prosperous Spider City-State.

Evict the spider village, scrape off the rust with a wire brush, wipe clean, and apply a coat of white primer: 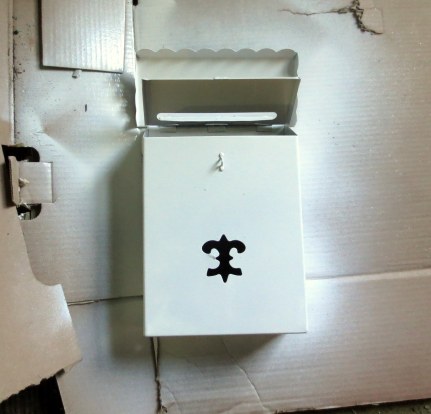 Next, apply a coat of bright yellow oil-based paint. Loyal readers may remember this can of paint from my Upcycled Hubcap and Upcycled Recycling Center* projects; it’s like sunshine in a can:

• BRIGHTLY-COLORED PATIO FURNITURE:  You need a throne on which to eat your ice cream, it may as well add a pop of color** to your depressingly drab front porch.  These modern orange chairs will do the trick. Especially since we already owned them:

PRO-TIP!  Say it with me – NO STUFFED FURNITURE ON YOUR FRONT PORCH. Nothing soft: no couches, loveseats, easy chairs or beanbags. Your house will look even more abandoned, or worse – occupied by squatters (if you’re looking for ours, they’re behind the garage). You can now buy furniture specifically for the outdoors, in smooth, nonporous materials and bright, eye-catching colors. And no, milk crates do not qualify as outdoor furniture.

• SAN SERIF HOUSE NUMBERS:  Your house numbers are your home’s smile. Do you want your smile to be yellowed, cracked and ancient-looking? 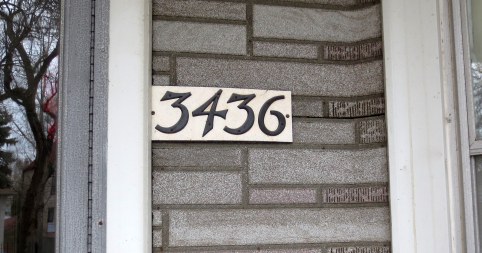 Or fresh, bright, modern, and centered rationally in the middle of your face?

I stumbled upon these numbers while shopping for drill bits at a certain orange-colored big box store.  The numbers were too big for the existing plate, so I had to saw down and paint a piece of scrap wood. Which was a bit of work, but now my address even smells new.

And yes, creeps of the world, now you know my home address. Not sure why I bothered obscuring it in all those other pictures, since, if you’re reading this, you’re either a friend of mine or you live in Australia.

Time for the big reveal***:

And for added affect, let a small child run around in the front yard unsupervised, or frantically pound on the storm door at passersby: